By Newsroom on December 5, 2012Comments Off on Mashed Potatoes with a British Flair -Taste the Difference with Sainsbury’s New Perfect Masher

Greenvale AP, the UK’s leading potato supplier, has developed a new British grown variety, Flair which is being marketed as the very best mashing potato available.

Sold exclusively through Sainsbury’s this ‘ultimate’ masher has consistently beaten other traditional mash varieties in taste tests, maintaining its texture where others have failed. Consumers have remarked on Flair’s beautiful golden colour, fabulous fresh aroma, velvety consistency and its ability to produce delicious fluffy mash every time.

Grown in Britain by Greenvale growers, the Flair mashing potato is on sale now as part of the Taste the Difference range in 200 Sainsbury’s stores nationwide. They are currently priced at £2 for a 1.5kg bag.

Greenvale AP handles 600,000 tonnes of potatoes every year has been a major supplier to Sainsbury’s for over 40 years. Greenvale AP is a vertically integrated potato business; it breeds and develops new potato varieties, grows seed and ware potatoes, washes, selects and packs fresh potatoes for the retail, wholesale and food service sectors and peels and slices/dices potatoes for the food ingredient and ready meal sectors through its Swancote Foods business. While a significant grower of potatoes in its own right, Greenvale AP also boasts the largest and most diverse grower base in the UK. Its seed potato operation is managed from a specialist office at Burrelton near Perth in Scotland.

Founded over 40 years ago, Greenvale AP has become a major player in the UK potato industry but it remains loyal to its roots and maintains a strong local identity 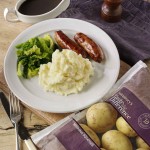 Mashed Potatoes with a British Flair -Taste the Difference with Sainsbury’s New Perfect Masher added by Newsroom on December 5, 2012
View all posts by Newsroom →