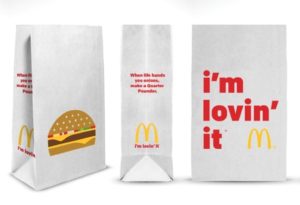 McDonald’s is starting off the new year with new takeout bags that seem to offer customers a choice: Blare to the world that you’re lovin’ it, or hide your McIndulgence altogether.

The fast food giant started rolling out the new bags last month as part of a new marketing campaign that also includes commercials and employee uniforms as it tries to recover from stubbornly sagging sales and win back younger customers.

The takeout bags on one side feature the fast-food giant’s “I’m lovin’ it” slogan in large, red letters, with small golden arches in the bottom corner following the catchphrase. People who feel embarrassed about lovin’ the fast-food chain’s food, however, can opt to show off the other side—a generic-looking burger graphic amid a bunch of white space, with no McDonald’s logos—and keep their guilty pleasure a secret.

The plain-and-simple approach to packaging is taking hold in the industry, spurred by the fast-growing higher-end burger chains that are likely stealing business from McDonald’s. For instance, Shake Shack and Five Guys have simple brown bags with little or no writing. Smashburger has a white bag with large block lettering. Wendy’s changed its packaging about two years ago to be simpler, and it’s also now white with a red logo of mascot Wendy. 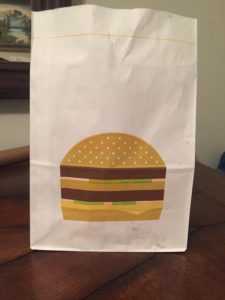 A McDonald’s spokeswoman to the Wall Street Journal that packaging was designed with “a fresh, modern and simple look in mind, to highlight the playful icons that reflect some of our iconic menu items.” The bags also have messages on the narrow side, such as “The reason people smile when you say cheese” and “When life hands you onions, make a quarter pounder.”

McDonald’s U.S. marketing chief Deborah Wahl said that the idea is to focus more on lovin’ it—the catchphrase McDonald’s has sported for over a decade. While she doesn’t go so far as to say “Lovin’ beats hatin’,” a phrase expected to be part of the campaign in some way, she closes out the four-minute pitch with: “Lately the balance between lovin’ and hatin’ seems off. Who better to stand up for lovin’ than McDonald’s?”