By Newsroom on February 26, 2016Comments Off on McDonald’s France Highlights Customer Proximity with Hilarious Billboard

McDonald’s in France has erected a billboard looking to misdirect drivers looking for Burger King – in a new ad. 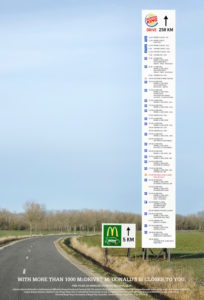 The ‘Directional billboard’ campaign from TBWA Paris has been erected in a reclusive spot to hit home that McDonald’s is always the closer option.

The company claims to have over 1,000 McDrive Thrus in the country, and the oversized (and cheeky) billboard hopes to inform viewers how much easier it is to commute to its outlets than those of fast food rival Burger King.

Taking trolling to a whole new level in the marketing sector, the convoluted sign reminds drivers that they are 258km from the nearest Burger King.

In contrast, from that point in Brioude, McDonald’s is merely 5k away.