By Newsroom on March 31, 2014Comments Off on McDonald’s Hits Back At Taco Bell Ad With Chihuahua Photo & Free Coffee 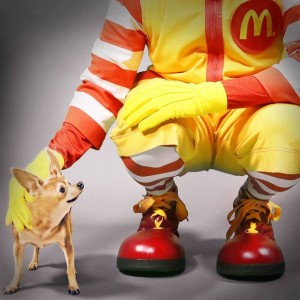 McDonald’s will give away coffee at breakfast for the first time, the company announced on March 28 – one day after Taco Bell began a massive marketing campaign for its new breakfast menu, which took a shot at the fast food giants.

In retaliation, the home of the Golden Arches revealed a photo of its smiley clown mascot petting the deceased Taco Bell Chihuahua on Facebook, accompanied by the tagline “Imitation is the sincerest form of flattery.”

In recent years, McDonald’s has had a continuing promotion for $1 cold drinks such as iced tea, but this is the chain’s first free national coffee promotion. It will start Monday, March 31, and will last two weeks. The small coffees will be available during breakfast hours, a part of the day that McDonald’s dominates by a wide margin.

“This event is McDonald’s way of encouraging new guests to try McCafe Coffee while giving our breakfast lovers even more reason to enjoy the great taste of our signature blend,” said Greg Watson, senior VP-McDonald’s U.S. menu innovation, in a statement.

McDonald’s in January said during a conference call for its fourth quarter results said that coffee and the marketing of it would be a priority, a reaffirmation of an announcement the chain made in November.

The promotion comes not just after Taco Bell’s incursion into mornings, which is sure to create some competition for the Golden Arches, but as Starbucks continues to increase sales at a rate that McDonald’s isn’t. Starbucks, after all, in 2013 had its best year in the company’s history, with global same-store sales up 6% from the prior year and same-store sales in the Americas up 7%.

McDonald’s, which rolled out McCafe in 2009, has worked to position the line as a premium offering on par with Starbucks.

As part of the promotion, McDonald’s will host “Make Friends with McCafe” sampling events at what it called high-traffic locations and transportation hubs in multiple cities across the country.

McDonald’s Hits Back At Taco Bell Ad With Chihuahua Photo & Free Coffee added by Newsroom on March 31, 2014
View all posts by Newsroom →