By Newsroom on January 21, 2014Comments Off on McDonald’s Invites Fans to Send #CheersToSochi During Winter Olympics

With less than one month until the start of the Sochi 2014 Olympic Winter Games, McDonald’s is launching a new social media campaign to connect fans from around the world with Olympic athletes. Supporters can send personalized messages and good luck wishes to their favorite athletes and teams competing in Sochi by using the hashtag #CheersToSochi on Twitter or visiting www.cheerstosochi.com. The cheers will be shared at a special display in the Athletes’ Village in Sochi, where athletes can view and print these messages onto ribbons to wear around their wrists. Athletes may even tweet their appreciation back to lucky fans.

“McDonald’s takes tremendous pride in our 38-year partnership of the Games, and we share in the International Olympic Committee’s passion for bringing the world together,” said Steve Easterbrook, global chief brand officer for McDonald’s Corporation. “This Olympic experience gives fans the ability to make personal connections with athletes in Sochi in a way they’ve never had before.”

“The encouragement from fans serves as significant motivation for me and my fellow athletes as we compete for Gold in Sochi,” said two-time Olympic Champion Shani Davis. “Wearing inspiring messages from fans is a memorable reminder of the support we have back home.”

Fans can visit www.cheerstosochi.com to learn more and start sending messages to athletes and teams gearing up for Sochi.

“McDonald’s is a valued global Olympic partner, and we appreciate their incredible ability to reach millions of fans around the world with innovative, inspiring programs like this,” said Timo Lumme, managing director of the International Olympic Committee Television and Marketing Services. “Their ‘Cheers To Sochi’ program celebrates the spirit of the Games and supports what we all stand for – bringing the world together to be our best.” 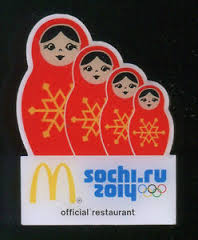 This social media campaign is just one way McDonald’s will celebrate the Olympic Winter Games while in Sochi. In the spirit of bringing friends and family together to have fun and play, McDonald’s also will donate a new children’s playground to the city of Sochi. The playground is designed to meet the needs of children with disabilities, enabling all children to play, learn and be active together.

Additionally, McDonald’s will bring kids together in Sochi for a once-in-a-lifetime opportunity to experience the Games first-hand via its Champions of Play program. This program is an effort to emphasize the importance of play and being active, and create a unique experience for kids and families.  Champion kids will attend Olympic events, meet athletes and get exclusive, behind-the-scenes tours of select Olympic venues. The Sochi Organizing Committee recently awarded the Russian program with its “Best Project of the Year for Youth Engagement” as part of the Sochi 2014 “Gateway to the Future” Sustainability Award.

Lastly, McDonald’s guests in Sochi will be served during the Games by the McDonald’s Olympic Champion Crew, more than 350 hand-picked crew members from across Russia. These best of the best restaurant staff are selected based on their status as McDonald’s All Stars or Employees of the Month at their hometown restaurants. To learn about these programs and more, visit the McDonald’s Olympics media section.

McDonald’s Invites Fans to Send #CheersToSochi During Winter Olympics added by Newsroom on January 21, 2014
View all posts by Newsroom →