By Newsroom on July 22, 2016Comments Off on McDonald’s Kills Design-a-Burger Promotion After Distasteful Results 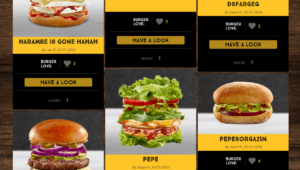 McDonald’s has seemingly closed down its ‘Create Your Taste’ promotion in New Zealand after the online burger customisation tool led to a barrage of derisive, and in some cases offensive, results.

The microsite – which has now been taken offline – encouraged users to design their own virtual burger, by choosing a selection of ingredients, give it a name and share it online, in exchange for a free fries and soft drink in-store.

While word filters were in place to stop directly offensive tools, this didn’t stop internet users finding workarounds, especially after the site was picked up by popular gaming forum NeoGAF.

The resulting burgers varied from ‘Toddler Body Bag’ (by one ‘Hugecoc K’) to ‘Rons Creamy Surprise’ (by ‘Ronald M’), to references to Harambe, the gorilla shot in Cincinnati Zoo earlier this year who has become an online meme, and even Nazi and anti-Islamic ideology.

Many of these creations were up-voted using the ‘burger love’ option to push them to the site’s front page. It’s a similar process to the #NameOurShip campaign earlier this year, which saw ‘Boaty McBoatface’ shoot to the top of an online poll to name a British Antarctic research ship – and a reminder of the importance of filtering user responses before making them public online.