By Newsroom on October 25, 2013Comments Off on McDonald’s Shines Light on Supply Chain in Provenance Push

McDonald’s is launching a nationwide provenance push to showcase the findings from a marketing initiative earlier this year that it claims provided customers with an “unprecedented” look at how its food is sourced.

The “Quality Scouts” campaign launched in May and opened up the company’s supply process at a selection of the 17,500 British and Irish farms that supply the business. Sixteen scouts were chosen from an online application process at the time, to report back on how products such as the Big Mac and Fries and the Sausage and Egg McMuffin are made.

While many of the scouts claimed they were McDonald’s fans before being selected, some said they were not regular customers but have had their perceptions of the brand change for the better after conducting the reviews. The restaurant is hoping the campaign, which launched October 25, creates a similar outcome among the majority of its customers. 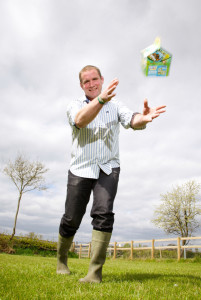 Online fans are being directed to a hub to access written and video versions of the reports, while an in-store push will feature photos of the Scouts. Former English Rugby Union player and 2011 Celebrity Masterchef winner Phil Vickery is fronting the campaign. Additionally, a live Q&A with the restaurant’s supply chain and agricultural experts will be hosted on its Facebook page later today.

The fast-food chain says it will take the feedback on board to improve its products and processes.

It is using the initiative as a platform to bolster the brand around food provenance, a move it feels can help lift sales and market share in the UK. The quality push stems from the rising concerns from consumers about the quality of their food after traces of horse DNA were found in several beef products on sale at supermarkets and restaurants in the UK earlier this year. While McDonald’s burgers were found to be free of horsemeat, the company launched a provenance push to allay any potential concerns.

The company says it wants to strengthen its provenance credentials in other markets moving forward claiming earlier this week that customers “want hear about provenance and where the food is from”.

McDonald’s Shines Light on Supply Chain in Provenance Push added by Newsroom on October 25, 2013
View all posts by Newsroom →