By Newsroom on December 15, 2014Comments Off on McRib Will Return To McDonald’s For The New Year 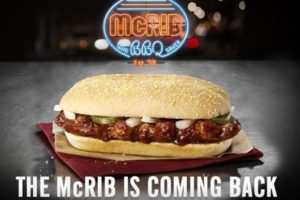 The McDonald’s McRib will return on 31 December, the fast food chain confirmed.

Burger lovers have long been mystified by the elusive McRib, which tends to make intermittent appearances on the McDonald’s menu in the UK and US.

The McRib is a barbecue sauce-infused pork sandwich that reportedly first arrived in 1981, only to disappear in 1985 after poor sales. It was reintroduced and, since around 2006, has reappeared and disappeared at random.

That’s earned the short-lived sandwich a cult status of its own, with mentions on How I Met Your Mother and The Simpsons, plus intense speculation on whether the meat is actually pork.

McDonald’s UK confirmed the return of the McRib on Twitter, while customers who search for ‘McRib’ on Google will see a paid search result stating: “The McRib is back (Soon).” The McRib will return in the UK from 31 December 2014 to 3 February 2015.

McRib Will Return To McDonald’s For The New Year added by Newsroom on December 15, 2014
View all posts by Newsroom →