By Newsroom on December 3, 2013Comments Off on Mondelez International to Invest $190 Million in Largest Plant in Asia Pacific 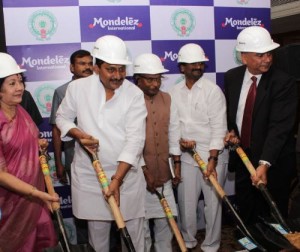 Mondelez International announced plans to invest $190 million in the Indian state of Andhra Pradesh to establish the company’s largest manufacturing plant in Asia Pacific.  The 134-acre multicategory food campus in Sri City will have annual capacity of 250,000 tons in the end state and will be the largest chocolate manufacturing plant in India.  The first phase of the project is expected to be completed by 2015.

“We’re implementing a number of initiatives around the world to capitalize on the growing demand in emerging markets while also aggressively reducing costs and improving productivity.  We’re pleased with our progress in the regions where we’ve already begun to invest.”

Last September, Myers highlighted numerous initiatives to redesign the company’s supply chain to deliver $1 billion in annual productivity savings over the next three years.  These savings will be a primary driver of significant improvements in the company’s base operating income margin in the near term.

“We’re delighted to partner with the government of Andhra Pradesh on this new investment, which will help us build on our success in India and drive long-term business sustainability. We expect this model plant to set examples in production efficiency, energy savings, emission reductions and community involvement.”

Mondelez International to Invest $190 Million in Largest Plant in Asia Pacific added by Newsroom on December 3, 2013
View all posts by Newsroom →