By Newsroom on April 3, 2013Comments Off on Mouton Cadet & Cannes International Film Festival: An Exceptional Partnership 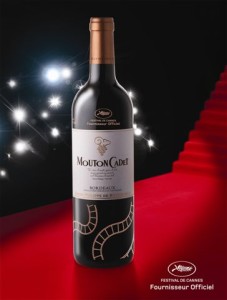 Between Baron Philippe de Rothschild’s Mouton Cadet, the number one selling Bordeaux and the Cannes Film Festival, the most reputed and recognised film event in the world, the encounter was beautifully obvious.

22 faithful years later, Mouton Cadet is still the Official Supplier of Wine to the Festival.

In celebration of the 66th Festival, Mouton Cadet will reveal its evening dress with a collector bottle: Mouton Cadet Edition Spéciale Cannes 2013.

This limited edition will be tasted every day in all sorts of atmospheres: official opening and closing dinners, Plage and Hôtel Majestic, Patio Canal +, Nikki Beach, La Plage Orange.