By Newsroom on November 25, 2013Comments Off on Nestlé Expands Factory Production in Turkey 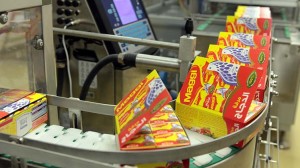 Nestlé has invested £6.7 million to expand production at one of its major regional manufacturing hubs, in western Turkey, creating an additional 100 jobs.

The Karacabey factory first opened in 1989 and will now also make Maggi brand bouillon for the growing Saudi Arabian market.

“Turkey is one of the fastest growing and most dynamic markets in Asia, Oceania and Africa,” said Nestlé Executive Vice President Nandu Nandkishore at the inauguration ceremony.

“This investment makes the site one of Nestlé’s largest production facilities in the region.”

The first factory at the Karacabey site opened in 1989 and a second plant, owned and operated by Cereal Partners Worldwide – a joint venture between Nestlé and General Mills – was built in 2011.

The new Maggi production lines will use the latest technology to produce 1,200 packages a minute, generating a total of 7,300 tons of bouillon annually from 2014.

Nestlé opened its first office in Turkey in Istanbul in 1909. The company now has four factories in Turkey and sells more than 800 products, employing 3,800 people across the country.

Nestlé Expands Factory Production in Turkey added by Newsroom on November 25, 2013
View all posts by Newsroom →