By Newsroom on April 2, 2013Comments Off on Nestlé to build Nescafé Coffee Centre in China 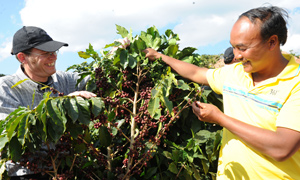 Nestlé is helping to accelerate the development of China’s coffee industry with the construction of new facilities that will provide farmers with training in improved growing techniques, at the same time as promoting the beverage to more consumers.

The company has signed a memorandum of understanding with the local government in Pu’er, Yunnan province, agreeing to invest in a Nescafé Coffee Centre in the region that will include a coffee farming institute and a consumer experience centre’.

The institute, which will be the largest of its kind in China, will provide training to 5,000 farmers, agronomists, and coffee business professionals every year.

The experience centre will be used to raise the profile of coffee grown in Yunnan province among consumers from China and the rest of the world.

The site will also provide much-needed infrastructure to support rapidly expanding coffee production in the region. It will offer modern warehousing facilities and a quality testing laboratory that will help to set local benchmarks against international standards.

“We have worked with farmers and the local authorities in Yunnan province for 25 years to develop the region into a world-class coffee growing district,” said Heiko Schipper, Managing Director of Nestlé’s Food and Beverage Division in the Greater China region.

“Over that time, our agronomists have provided more than 8,500 farmers with free agricultural assistance and training in improved growing techniques.

“This new centre is a continuation of our long-term investment in the future of coffee production and consumption in China,” he added.

The Nescafé Coffee Centre in Pu’er will give consumers the opportunity to learn about the origins of coffee growing in the region and to sample different blends.

It is a continuation of Nestlé’s efforts to promote coffee to Chinese consumers.

In 2012 the company launched a new version of its Nescafé 1+2 Original instant coffee, based on extensive research that found Chinese consumers now expect a richer, more aromatic taste with more balanced, milky flavours.

“They are increasingly taking time to savour the experience of drinking it in and out of home.”

The company has set up buying stations to procure coffee directly from farmers, helping them obtain better prices and a steady income. In turn, this has helped Nestlé obtain a regular supply of quality coffee.

In 2011, the company extended its support for local farmers in Yunnan with the introduction of the Nescafé Plan. The ten-year, worldwide, CHF 350 million initiative brings together Nestlé’s commitments on coffee farming, production, supply and consumption.

It will see the company double the amount of coffee it buys directly from farmers and their associations by 2015.

Nestlé purchased 10,500 tonnes of coffee during the last season in Yunnan province, or about 20% of the region’s total crop. The company’s coffee buying programme directly supports the livelihoods of up to 20,000 people.

In total, Nestlé’s commitment to developing coffee growing in the region has a positive impact on the livelihoods of about 80,000 members of the wider farming community.

Nestlé announced its investment in Yunnan province just two days after it said it would continue with the second phase of its five-year, 500 million Yuan (more than CHF 70 million) investment in its ice-cream business in China.

The company completed the first phase of the investment last year with the installation of new equipment at its ice cream cones factory in Guangzhou province.

This will increase production capacity to over two million per day, making the factory Nestlé’s largest ice cream cone manufacturing facility in the world.

Nestlé to build Nescafé Coffee Centre in China added by Newsroom on April 2, 2013
View all posts by Newsroom →