By Newsroom on February 11, 2013Comments Off on New Faces For Iconic GOT MILK? Billboard Revealed 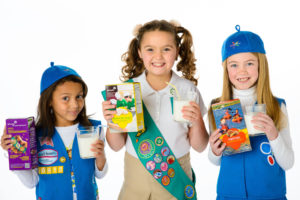 Just in time to proudly celebrate National Girl Scout Cookie Day, the California Milk Processor Board (CMPB), the creator of GOT MILK?, and the Girl Scouts in California revealed the names and faces of the three grand prize winners of the GOT MILK? – Girl Scouts Photo Contest during unveiling ceremonies held simultaneously in Los Angeles, Oakland and San Diego.

“This contest commemorates the 15th Anniversary of the print campaign we launched with the Girl Scouts in 1997,” said Steve James , executive director of the CMPB.  “Eleanor, Madison and Maria Isabella are strong, healthy and confident young ladies who have demonstrated that they are great ambassadors for both GOT MILK? and the Girl Scouts in California.”

The GOT MILK? – Girl Scouts Photo Contest garnered more than 300 entries throughout the state.  The three grand prize winners were selected from a pool of 24 finalists, who also each won a camp scholarship worth $350 for their efforts.

The winning billboards will be up throughout the month of February and are available for viewing at the following intersections:

It featured an adorable 10-year-old Girl Scout who made an impression on Californians with her iconic uniform and an armful of cookie boxes, provoking the question, “GOT MILK?”

Each member submitted a photo with a caption of no more than eight words showcasing the contest prompt: How have Girl Scouts and milk helped them become strong, healthy and confident?

To see a picture of the winning girl scouts and the names of the 24 finalists, visit www.gotmilk.com/news.

New Faces For Iconic GOT MILK? Billboard Revealed added by Newsroom on February 11, 2013
View all posts by Newsroom →