By Newsroom on October 10, 2012Comments Off on New Nescafé recipe to meet Chinese consumers’ changing tastes

Consumers in China will now be able to enjoy a smoother cup of coffee as Nestlé relaunches its popular Nescafé 1+2 Original to meet their changing tastes.

The company has spent four years developing the new recipe, which is based on extensive research into consumer preferences.

The company will roll the product out across China this month. It will be supported by a new communication campaign encouraging consumers to spend more time enjoying a cup of coffee together.

“Today, more and more consumers are regarding coffee as a social drink to enjoy in and out of home.

“They are increasingly taking time to savour the experience of drinking coffee while connecting with each other face-to-face,” he continued.

Nestlé introduced Nescafé to China 25 years ago. It is now the leading coffee brand in the country.

A wide selection of other Nescafé coffee product lines is also available in China including Nescafé Premium, Nescafé Café Collection and Nescafé Classic.

“We hope the new recipe will appeal to even more people in China and introduce Nescafé to a new generation of coffee lovers.”

Nestlé’s long-term commitment to help develop coffee culture in China were recognised in June with a World Business and Development Award.

The international award acknowledged the efforts of Nestlé agronomists to provide more than 5,000 farmers in Yunnan province with free agricultural training since the company started work in the region in 1988.

In 2011, Nestlé extended its support for local farmers in Yunnan with the introduction of the Nescafé Plan. The ten-year, worldwide, CHF 350 million initiative brings together Nestlé’s commitments on coffee farming, production and consumption. It will see the company double the amount of coffee it buys directly from farmers and their associations by 2015. 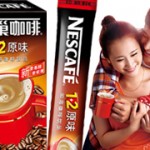