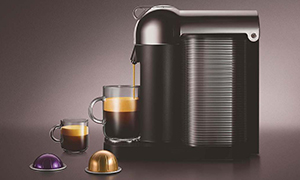 Nespresso is launching a new large-cup coffee system in the US and Canada, aiming to secure a major segment of a market worth some $5bn each year in the US alone.

The new VertuoLine system, the result of almost a decade of research, has been designed to meet the tastes and preferences of the North American consumer, creating an American-style large-cup coffee as well as the authentic European espressos for which the brand is famous.

“VertuoLine will be a game changer and will revolutionise the most successful segment of the coffee market in North America and change the way coffee is brewed and enjoyed at home,” said Jean-Marc Duvoisin, CEO of Nestlé Nespresso.

“We believe we are poised to reshape the entire industry in North America. We are entering a highly competitive market with a premium offering, and VertuoLine will win on quality and technology, for which we have long been the leader,” he added.

Nespresso’s decision to create the first Nespresso system that delivers large-cup coffee is fuelled by burgeoning growth in the portioned coffee category in North America, where sales have tripled in just three years.

It also builds upon Nespresso’s long history of portioned coffee systems, which it first launched almost three decades ago.

The US market alone is expected to account for half of the predicted global growth in the segment.

The VertuoLine coffee range will include flavoured coffees as well as a half caffeinated variety among the eight large-cup coffee varieties and the four espresso blends.

The innovative, Swiss-designed machine is based on an intelligent brewing system. There is a bar code on each coffee capsule which allows the machine to recognise and adapt extraction to create the optimal cup of coffee.

Unlike any other machines on the market, the Nespresso VertuoLine also creates large-cup coffees with “crema” – a naturally formed foam of coffee and air that has, until now, been the signature of a quality espresso coffee.

The machine will be sold directly to consumers through the network of Nespresso boutiques and at www.nespresso.com, as well as selected US retailers including Macy’s, Bloomingdales, Sur La Table and Williams-Sonoma.

Ensuring sustainability in its coffee supply chain is a priority for Nespresso whose AAA Sustainable Quality Programme, developed in collaboration with the Rainforest Alliance, seeks to ensure the highest quality coffee while helping to improve the livelihoods of coffee farmers and their families.

Currently some 62,000 coffee farmers across eight countries are part of the programme which, last year, provided 84% of Nespresso’s coffee.