By Newsroom on November 28, 2013Comments Off on New Nestlé Freezers to Help Tackle Climate Change 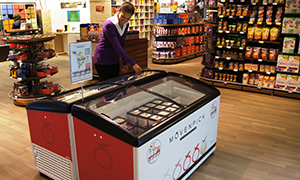 The company has pledged that from now on all new commercial horizontal ice cream chest freezers bought by Nestlé across Europe will use only natural refrigerants.

These are naturally occurring substances – like carbon dioxide, ammonia, water or air and hydrocarbons, like propane and iso-butane – which do not harm the ozone layer and have no or negligible global warming effects.

The new horizontal ice cream chest freezers will reduce energy consumption by more than a third, in comparison with existing systems.

The company has also invested more than £162 million to replace synthetic refrigerants with natural alternatives in more than 92% of its industrial refrigeration systems.

The decision to systematically introduce these commercial horizontal ice cream chest freezers across Europe is part of Nestlé’s commitment to progressively phase out the use of high global warming potential refrigerants, such as hydrofluorocarbons (HFC).

It also moves the company beyond meeting the Consumer Goods Forum Resolution on Refrigeration, which encourages businesses to take action towards phasing out some HFC refrigerants from 2015.