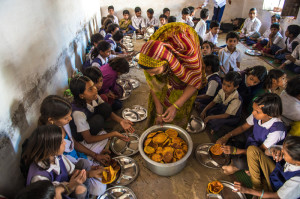 Asia and the Pacific’s drive for food security has focused too narrowly on quantity, with a surge in obesity and still high levels of malnutrition in some countries highlighting the need for a new approach, says a new Asian Development Bank (ADB) study.

“Many developing countries in the region face the twin burdens of both under and overnutrition,” said Cyn-Young Park, ADB Assistant Chief Economist. “Improving nutritional standards rather than just boosting calorie intake is essential if the region wants a secure and healthy food future.”

The study Food Security in Asia and the Pacific, says the region’s growth boom has been accompanied both by sharp dietary changes and uneven food access. The affluent have developed an appetite for protein rich and processed foods, including more meat and dairy products.

At the same time, over half a billion people remain undernourished―more than the total in Africa―childhood stunting rates are above 40 percent in several countries, and there are high levels of Vitamin A deficiency in Cambodia, India, Myanmar, Nepal and Pakistan with several other economies close behind.

Obesity, in contrast, has been rising fast both in urban centers and in some Pacific Islands where the rates are among the highest in the world. The shift to rich, often sugar-based, foods has seen a spike in diabetes and other diet-related diseases. The demand for meat is also changing agricultural land use patterns.

Resolving these challenges goes hand-in-hand with tackling other food security issues such as fast rising populations, strains on land, water and energy, and the growing threat from climate change. Asia and the Pacific currently accounts for 60 percent of the world’s population, and it will have added over 850 million people by 2050, requiring vastly more food, but expanding cultivated land in nearly all countries in the region is no longer a viable option.

The solutions must be wide ranging and sustainable, and include both domestic and broader measures. High yielding crops and other technologies are needed to produce more food from the same amounts of land, and small poor rural landholders must get support to become more productive with better access to quality seeds, finance and other inputs.

The region’s policymakers must find ways of buffering the poor from price spikes in food – which accounts for up to 70 percent of their income – and ensuring they fully benefit from economic growth. Social safety nets provide a crucial support mechanism for low income groups, and targeted food aid and cash transfer programs among others, reduce the vulnerability of poor households, especially in crisis periods. Currently social protection spending amounts to less than 2 percent of total GDP in a third of 31 Asian countries.

Setting up national and regional food reserves as buffers during shortages, establishing emergency funds and insurance products to cushion against disasters, food trade liberalization, and investment in agricultural research are other ingredients that must be considered. Tackling both undernourishment and better nutrition, especially for children, requires more public awareness campaigns and targeted investments in health, education, water and sanitation infrastructure.

The study was compiled by ADB in collaboration with Foreign Affairs, Trade and Development Canada, Asia-Pacific Economic Cooperation and the Liu Institute for Global Issues at the University of British Columbia.

ADB, based in Manila, is dedicated to reducing poverty in Asia and the Pacific through inclusive economic growth, environmentally sustainable growth and regional integration. Established in 1966, it is owned by 67 members – 48 from the region. In 2012, ADB assistance totaled $21.6 billion, including cofinancing of $8.3 billion.