By Newsroom on July 10, 2015Comments Off on Omnivore Food Festival To Debut In London 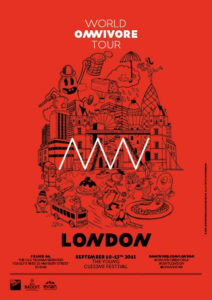 One of the leading food festival Omnivore sponsored by evian and Badoit is coming to London for the first time. From 10th-13th September 2015 English chefs will meet world-class international chefs for mutual inspiration and collaboration while Londoners are invited to discover their young and contemporary cuisine.

Already confirmed are London based James Lowe and Amandine Chaignot as well as the international Gregory Marchand (Frenchie, Paris), Franck Baranger (Caillebotte, Paris) and Pierre Sang Boyer (Pierre Sang in Oberkampf) on the ‘chef stage’, with a myriad of rising stars of mixology on the ‘liquid stage’.

Acting as a culinary hub Omnivore will bring together 16 master chefs from England and across the globe to share culinary inspirations and experiment with innovative techniques in London’s East End.

On top of that there’ll be dinners across the area for discoveries and the pleasures of contemporary cuisine. Taking place at The Old Truman Brewery in Shoreditch and the Amazing Dinners at Lyle’s the festival expects to attract 4000 attendees over four days.

“Omnivore is a Contemporary Food Laboratory where foodies can share their cooking, ask questions about techniques, learn from new cultures, and create motion to better imagine the future of food,” says Luc Dubanchet, Omnivore’s founder and CEO.

“I’m thrilled to bring Omnivore to London – one of the top culinary cities in the world. Apart from the high density of first class restaurants – there are up-and-coming and young talents with culinary influences from all over the world. No other city is as international as London.”

Born in France in 2003, Omnivore started to tour around the world in 2012 becoming the only travelling culinary festival in the world. This year the world tour will stop by in eight other prestigious cities: Paris, Moscow, Shanghai, Montreal, Sydney, Rio de Janeiro, Istanbul and New York.

Omnivore Food Festival To Debut In London added by Newsroom on July 10, 2015
View all posts by Newsroom →