By Newsroom on August 1, 2013Comments Off on Pele Introduced as Global Brand Ambassador for Subway Restaurants 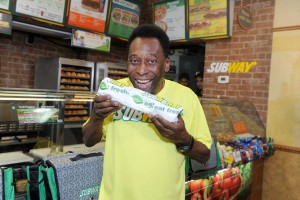 He joins a wide-ranging list of athletes with champion pedigrees including Michael Phelps, Apolo Ohno, Nastia Liukin, Ryan Howard and Justin Tuck, who eat at, and work with, Subway Restaurants.

As the newest Famous Fan, Pele will appear in various advertising and in-restaurant promotional campaigns throughout a multi-year relationship with the brand in the U.S. and around the globe.

With more than 39,700 locations in over 102 countries, Subway is the largest restaurant chain in the world, boasting more than 1,000 locations in Pele’s native Brazil. A long-time fan of the Restaurants, Pele’s favorite sandwich is Tuna on Italian bread with lettuce and salt and pepper.

“Futbol is the global sport and Pele is the pre-eminent player of all time,” said Tony Pace, Subway Global Chief Marketing Officer. “It’s great to have him as part of the brand around the world.” 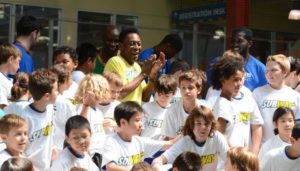 “Throughout my entire career, I always made sure to take care of my body with proper nutrition, training and rest,” said Pele.  “With Subway Restaurants’ approach to fresh, better-for-you options, I look forward to working alongside other Famous Fans to encourage families around the world to eat well and lead active lives.”

Edson Arantes do Nascimento, better known as Pele, is regarded as a national hero in his native Brazil and as a soccer legend around the world. He is thought of by many experts, critics, former and current players alike as the best player of all time, having made famous one of today’s most exciting soccer moves – the bicycle kick.

He is the only player to this day to have won three World Cups and he has held numerous titles including Football Player of the Century and Athlete of the Century. He is considered to be the all-time most successful goal scorer in the world with 1,283 goals throughout his illustrious career.

Subway Restaurants established this relationship with Pele’s agency of record, Legends 10, after an introduction by Mediacom Sport.

Pele Introduced as Global Brand Ambassador for Subway Restaurants added by Newsroom on August 1, 2013
View all posts by Newsroom →