Pizza Hut Introduces Hot Dog Bites Pizza To The US

By Newsroom on June 12, 2015Comments Off on Pizza Hut Introduces Hot Dog Bites Pizza To The US 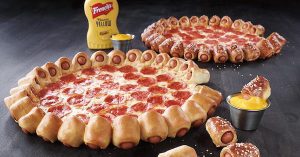 On 18 June, Pizza Hut will debut its ‘Hot Dog Bites Pizza’ in 6,300 of its stores across the United States.

The new item comprises 28 pigs-in-a-blanket, baked into the pizza crust, which customers can pull off and dip into French mustard.

This move comes in an attempt to revive the chain’s sluggish sales since it launched a new menu last year.

According to Bloomberg Business, the pizzas will be on the menu until 11 July or while stocks last.

Pizza Hut’s hot dog pizzas are already available in other parts of the world, such as several Asian markets, the UK, Thailand, Australia, Canada and the Middle East.

Doug Terfehr, a Pizza Hut spokesman explained, “Our US fans have been asking for it ever since they saw it pop up around the world. We wanted to do it in a way that matched what the consumer would expect from these products, which they definitely love on their own.”

Pizza Hut Introduces Hot Dog Bites Pizza To The US added by Newsroom on June 12, 2015
View all posts by Newsroom →