By Newsroom on July 31, 2013Comments Off on Powerful Yogurt, First Yogurt for Men, Announces Expansion to UK & Ireland 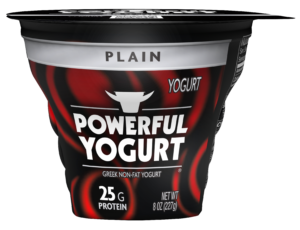 Powerful Yogurt, the first-ever Greek yogurt designed for men, has signed an agreement with Irepak Ltd. that will bring the Powerful yogurt line to the UK and Ireland in the first quarter of 2014.  The product will be available in supermarkets, gyms, health food stores and nutrition outlets.

The agreement marks Powerful Yogurt’s first wave of expansion beyond the U.S.

“From day one Powerful Yogurt has resonated with an global audience and we’re very excited about this first international expansion that will meet demand in the UK and Ireland markets,” said Carlos Ramirez, Founder and CEO of Powerful Yogurt.

“We are proud to have created a brand that translates worldwide and look forward to continuing to expand internationally as we pioneer the ‘dairy for men’ category.”

Irepak will produce Powerful Yogurt in Ireland with the same all-natural standards and recipe guidelines that have been critical to the company’s success in the U.S. market. Irepak plans an initial rollout of four flavors, including plain, banana, mango, and strawberry.

“Irepak is delighted to be teaming with Powerful Yogurt at such an exciting juncture – not only in Powerful Yogurt’s impressive growth trajectory but also at a point when the European market for nutrition products is experiencing double digit growth,” said Irepak Managing Director Robert Doyle.

In addition to its high protein content and a serving size that is 50 percent bigger than the average U.S. yogurt presentation, Powerful Yogurt is all-natural, fat free, gluten free and kosher.

Powerful Yogurt was named “Best Yogurt” in the 2013 FoodBev Dairy Innovation Awards across an international field of competitors. The company’s 2013 sales are on track to exceed initial forecasts by more than 75 percent.