By Newsroom on September 7, 2015Comments Off on Quorn Brand On Sale For £500m 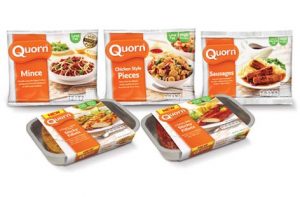 Quorn has announced that it will kick off a £500m auction of the business as it looks to build on its status as one of Britain’s biggest home-grown consumer brands.

Advisers to Exponent, which has owned Quorn since 2011, will release detailed information about the company to prospective buyers next week.

Private equity groups BC Partners, Cinven and KKR have been tipped as possible buyers however it is still unknown whether any of the firms will pursue takeover bids. American company WhiteWave, one of one of the biggest producers of plant-based foods such as Alpro, is also expected to show interest as is Swiss giant Nestle. Other top brands expected to battle it out for the sale include Nomad Foods, the new owner of Birdseye alongside Findus and McCain.

Unlike many of its competitors the company is in a strong position having recorded a 7 per cent increase in sales last year totalling £150m. The success was in part due to a major deal with one of the world’s largest retailers, Wal-Mart, which now stocks Quorn’s products in more than 2,000 stores.

Its brand has also benefited from having Olympic champion Mo Farah as its ambassador and is currently ranked by Nielsen as Britain’s 35th biggest brand, overtaking family fav­ourites such as Heinz tomato ketchup.

Founded in 1985 and based in North Yorkshire, Quorn has capitalised on growing consumer demand across western markets for diets containing less red meat‎ in light of health statistics highlighting an explosion in levels of obesity.

Quorn Brand On Sale For £500m added by Newsroom on September 7, 2015
View all posts by Newsroom →