Redd’s Apple Ale Takes a Turn For the Wicked

By Newsroom on August 6, 2014Comments Off on Redd’s Apple Ale Takes a Turn For the Wicked

Redd’s is introducing Redd’s Wicked Apple, the first refreshingly hard ale of its kind. At eight percent alcohol by volume, Redd’s Wicked Apple is a hard ale that amplifies Redd’s crisp apple flavor for an experience that starts strong and finishes smooth.

“Redd’s Wicked Apple was created to provide a refreshing alternative to drinkers during occasions that typically have been exclusive to spirits,” said David Kroll, MillerCoors vice president of insights and 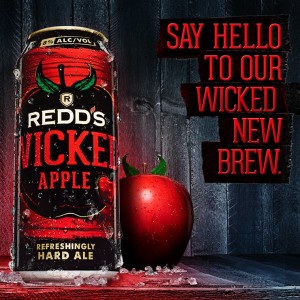 innovation.  “In the national marketing campaign, we will literally show Redd’s Wicked Apple smashing its competition and, in turn, positioning itself as the only choice that’s both refreshing and hard.”

The product will launch with a fully integrated “Refreshingly Hard” campaign, including TV, social, digital and experiential activations. Additionally, the brand will kick off a “Most Wicked Promoter” competition in September, in which the nation’s top promoters in Atlanta and New York City will battle it out to throw the most “wicked” party and give their city ultimate bragging rights.

Redd’s Wicked Apple is available in 12-pack 10-ounce cans as well as 16 and 24-ounce single cans.

Redd’s Apple Ale Takes a Turn For the Wicked added by Newsroom on August 6, 2014
View all posts by Newsroom →