By Newsroom on July 24, 2014Comments Off on Reebok Moves Into Bacon For CrossFit Promotion 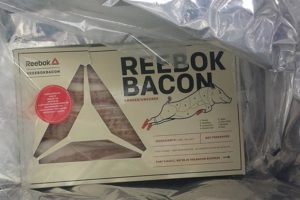 It’s a brand extension designed to raise eyebrows and whet appetites. Reebok has entered the bacon market with the launch of a campaign promoting its sponsorship of the Reebok CrossFit Games.

The Reebok CrossFit Games is a US tournament in which athletes compete for recognition as “The Fittest on Earth”.

This year the sports brand has decided to play up on its CrossFit association with a bacon theme, which is some kind of reference to the diet favoured by CrossFit athletes.

Reebok is delivering branded shoeboxes to all its Crossfit Games athletes; but instead of containing a pair of shoes, they contain uncured, nitrate-free bacon. The company will also deliver bacon snacks to spectators.

The initiative is being promoted on social media, with the hashtag #reebokbacon.

Reebok Moves Into Bacon For CrossFit Promotion added by Newsroom on July 24, 2014
View all posts by Newsroom →