By Newsroom on August 1, 2014Comments Off on Reinstating the King of Finland’s Long Drink Category! 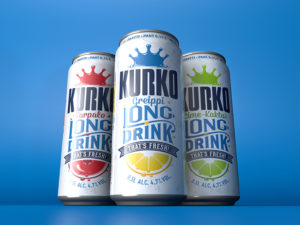 Kurko is a slang word for ‘King’, which is why the logo has traditionally included a crown – but the word is also used as slang to give someone or something praise – for example, ‘that’s Kurko’ = ‘that’s cool’.

Kurko was launched in 2003 with huge success throughout Finland in the wake of great national pride (Nokia, DJ Darude and various Rally and Formula 1 drivers). After many year of success sales of the brand began to decline.

Taxi Studio was called upon to provide a revolutionary redesign to make the brand appear more modern, witty and relevant to both male & female drinkers. (The previous design was much more male targeted, see attached images). 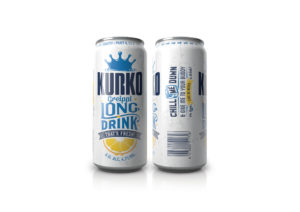 Creative Director Ryan Wills said: “This was great fun project from start to Finnish. The team at Sinebrychoff are a delight to work with and were really brave collaborators during our initially design explorations. We essentially bolstered Kurko’s brand equities and created a conversation on can that evokes Kurko’s witty proposition. The revised design aesthetic really hit the mark with consumers… together we’ve created a revolutionary design that reinstates Kurko as King of Finland’s Long Drink category, long may it reign!”

Ari Ahola, Brand Manager for Kurko said: “Working with the talent at Taxi Studio was a fun and very educational experience. From the beginning it was clear that whole process would be handled efficiently and with great expertise. All the test results are very promising. We have achieved the change we wanted. Kurko is now a more modern, stylish and suitable brand for both men and women. Thank you Taxi Studio!”

Reinstating the King of Finland’s Long Drink Category! added by Newsroom on August 1, 2014
View all posts by Newsroom →