By Newsroom on June 4, 2014Comments Off on Several Seattle Seahawks Players Tackle Corporate Jobs at Starbucks 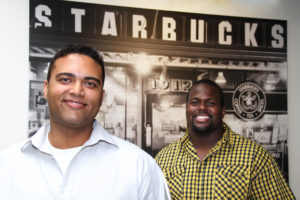 One man faced danger on battlefields; another is dangerous on a football field.

Together, a U.S. Marine sergeant and a Seattle Seahawks player realized how much they have in common as they discussed their career paths.

Military veteran Jamel Felix has been learning about job opportunities within Starbucks, and Seahawks defensive tackle D’Anthony Smith was among seven players who spent some free time over the past few weeks job shadowing people in various departments at Starbucks headquarters in Seattle. 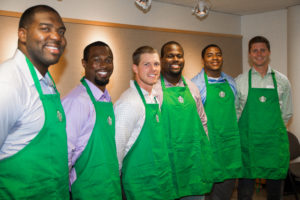 The job shadow program is one of many initiatives designed to offer guidance, education and support for players before, during and after their NFL experience. It was a natural fit for Starbucks, which has been working with the Seattle Seahawks since 2013 to find unique opportunities for players, partners (Starbucks employees) and the community to engage and learn from one another.

“You never know when you’ll get that phone call and someone tells you to bring your playbook,” said Smith. “The average NFL career is two to three years. Every athlete needs to think about what they would do if for some reason – possibly an injury – they couldn’t continue in their career.” 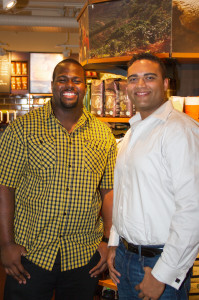 Sports came naturally for Smith who was born in Berlin, Germany and moved around a lot because his father was in the Army. The family eventually moved to Louisiana. He remembers his dad constantly told him to “shoot for your dreams,” while his mother reminded him “you need to get your education.”

Smith is doing both. He’s building on his degree from Louisiana Tech University by getting his MBA through Drexel University, and Smith is planning for his future after football.  He’s not in a rush though. Smith is hoping for a long career with the Seahawks as he sports his new Super Bowl ring.

“Meeting the President at the White House and getting the ring is definitely icing on the cake,” he said, “but there’s a lot of work ahead for the next season.”

Felix has also met President Barack Obama, although the circumstances were far different. He met Mr. Obama in Afghanistan.

“I’ve been to war in Iraq, Afghanistan, Bosnia and Kosovo,” said Felix, who joined the Marines in 1997. 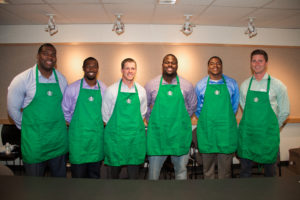 He was a Forward Air Controller and says he’s “seen a lot of combat” witnessing “the worst of humanity and the best of the military.” Although he left active duty in 2010, he’s a current member of the Marine Corps Reserve.

Both Felix and Smith are exploring how a future second career could possibly be as meaningful and exciting as what they’ve experienced in life so far. Felix is 36 years old, while Smith is 25.

“The military has defined who I am and I’m proud of what I did,” said Felix. “I would love to work at Starbucks.”

With Starbucks initiative to hire 10,000 veterans and military spouses by the end of 2018 underway, Felix noted, “Maybe I’ll be one of them.”

Smith said he appreciated “getting his toes wet in the corporate world” but still prefers having his feet in cleats. His plan for life after the NFL includes being a life coach preparing young people for careers in professional sports, or possibly pursuing clinical psychology.

“I wouldn’t mind getting another Super Bowl ring or two first,” he said with a huge smile as he prepared to go back to his day job with the Seahawks.