By Newsroom on September 27, 2013Comments Off on Shotopop Creates Chinese Folklore-based Designs for Johnnie Walker 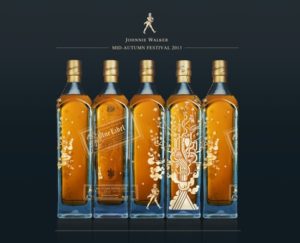 Aimed at the gifting market, the designs are loosely based on the Chinese folklore story of the Immortal Tree on the moon, Wu Gang, and the Jade Rabbit.

The legend tells the tale of an immortal tree that grows on the moon, which Wu Gang vainly attempts to fell. The Johnnie Walker Striding Man icon is transplanted into the story and shown to ascend the immortal tree.

Shotopop says, ‘When the Striding Man reached the top of the tree, he understood that just like the immortal tree never stops growing, his own journey knows no end. Wherever he adventures, his message to us all will always be the same: Keep Walking.’

Having designed the packaging, the consultancy went on to create the key visual for the campaign by building a 3D set, depicting the scene. The trees and characters, based on the packaging illustrations, were 3D printed, painted, and assembled before being photographed by Sam Hofman.

Casper Franken, Shotopop creative director says, ‘We took the idea of the natural tree and the organic shapes and modernized it and added more colours until it is what it is now – a modern, graphic representation’.