By Newsroom on December 8, 2014Comments Off on Slice of Prince William’s & Kate Middleton’s Wedding Cake Sells for $6,000 at Auction 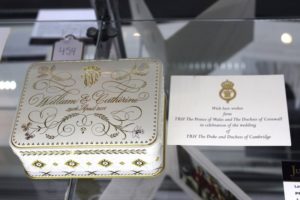 A wedding cake slice from the 2011 wedding of Prince William, Duke of Cambridge, and Duchess Kate Middleton, Duchess of Cambridge was sold at Julien’s Auctions in Beverly Hills for $6,000.

The buyer of this romantic slice of history was Gee Chuang, cofounder and CEO of Listia.com, an online marketplace startup in Silicon Valley. Chuang plans on giving away the $6,000 piece of wedding cake on Listia in April of 2015 to celebrate the royal couple’s fourth wedding anniversary and pending birth of their second child.

“Items like the cake have at times been privately purchased for huge sums of money and are rarely made available to the public at large,” said Gee Chuang, CEO and co-founder of Listia. “You should not have to be rich, famous or royal to collect the things you love. It is our goal at Listia to bring great value and unique opportunities to users of all socioeconomic backgrounds.”

The piece of wedding fruit cake came in a special collector’s tin wrapped in greaseproof paper that was given to guests at the royal wedding. Although the wedding cake still smells quite tempting, Chuang has no plans on having even a small bite.

The $6,000 slice of cake will be well preserved in a cool temperate controlled environment until the cake is given away on Listia’s online marketplace. Members will be given an equal opportunity to acquire the cake without ever having to be rich, royal or spend any physical money on the cake itself.

Slice of Prince William’s & Kate Middleton’s Wedding Cake Sells for $6,000 at Auction added by Newsroom on December 8, 2014
View all posts by Newsroom →