By Newsroom on March 30, 2015Comments Off on Starbucks Restores 1930s Hollywood Gas Station Into A Beautiful Drive-Thru 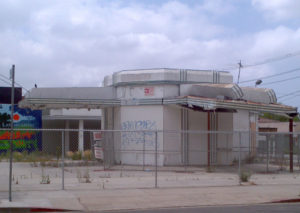 Nearly two years ago, Starbucks senior store design manager Jonathan Alpert and his team learned of a potential new Starbucks site in Los Angeles. It was an unusual location – an empty old gas station on a fenced-off corner of Highland and Willoughby.

“At the very beginning we knew this was something special,” said Alpert. “The building was in such a dilapidated state, but we could see it had potential. We wanted to restore the building in a way that allowed us to serve the community while celebrating its history.”

The curvilinear art deco structure was built in 1935 during the early days of California’s automobile age and the Golden Era of filmmaking in Hollywood. Gilmore Oil, which was then the largest independent oil company on the West Coast, purchased the parcel from film star Wallace Beery and opened one of its “Red Lion” service stations on the site. It operated as a gas station for several decades, later as a Mobil and Texaco station, until it was vacated in the 1990s.

In its heyday, it was a colorful backdrop for movies and commercials, including a scene between Nick Nolte and Eddie Murphy in 48 Hours and a fuel stop with Steve Martin in L.A. Story. It was registered as a Los Angeles Historical Cultural Monument in 1992. 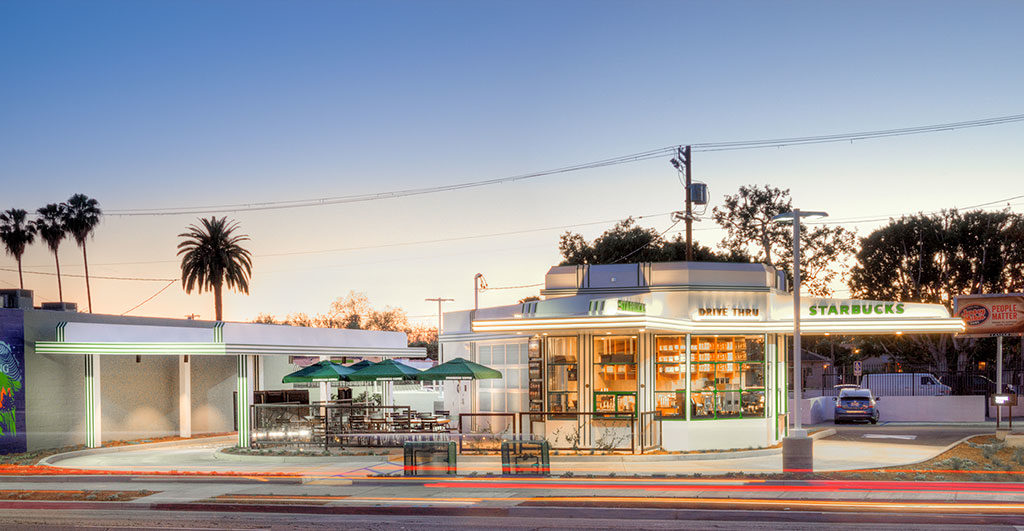 Alpert and his team drove back to Starbucks store design studio in Orange County and went to work, collaborating with the city of Los Angeles and hiring a historical consultant to make sure that its historic integrity was preserved during the restoration process.

The team created a design ideal for a store with both a drive-through for cars and walk-up window with outdoor seating area. They restored the main existing structure – the original “Y” shaped service station—as well as the canopy structure from an added car wash. They preserved and restored existing glass and metal elements wherever possible. 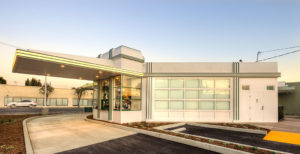 “The most interesting architectural features of the building are its sweeping cantilevered canopies that extend out like arms from either side of the building,” Alpert said. “When we came in, these were falling down. We made them structurally sound and now they look much like they did in their original state, 80 years ago.”

The team also made some updates, adding energy efficient LED rope lights to replicate the old tubes of neon lighting. Non-historic contemporary service bay roll-up doors were replaced with aluminum frame garage doors in the style of the period to form an exterior wall.

“We didn’t try to over-brand the building,” he said. “We tried to keep it true to the original, placing only limited signage.” 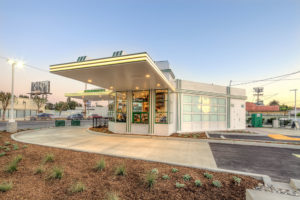 While the drive-through evokes the same automotive spirit and speedy service of the classic gas station, designers also created inviting outdoor spaces for customers to stop and stay a while. Green Starbucks patio umbrellas shade an open seating area for up to 24 customers, who can gather around a concrete community table or small patio tables. Because the property was primarily paved historically, Starbucks designers limited extensive plantings, but incorporated native grasses, silver carpet ground cover, and loquat trees.

“Starbucks real estate and design teams are always looking for unique locations that connect us to the past,” he said. “Sometimes we stumble on a gem like this one, and are honored to get the chance to bring it back to life.”

The new Highland & Willoughby store is one of Starbucks newest historic restorations of historic buildings, which include New Orleans Canal Street store and the new Starbucks Reserve Roastery and Tasting Room.

“We have reinvigorated the corner of this community and its art deco past,” he said. “Now it’s electric.” 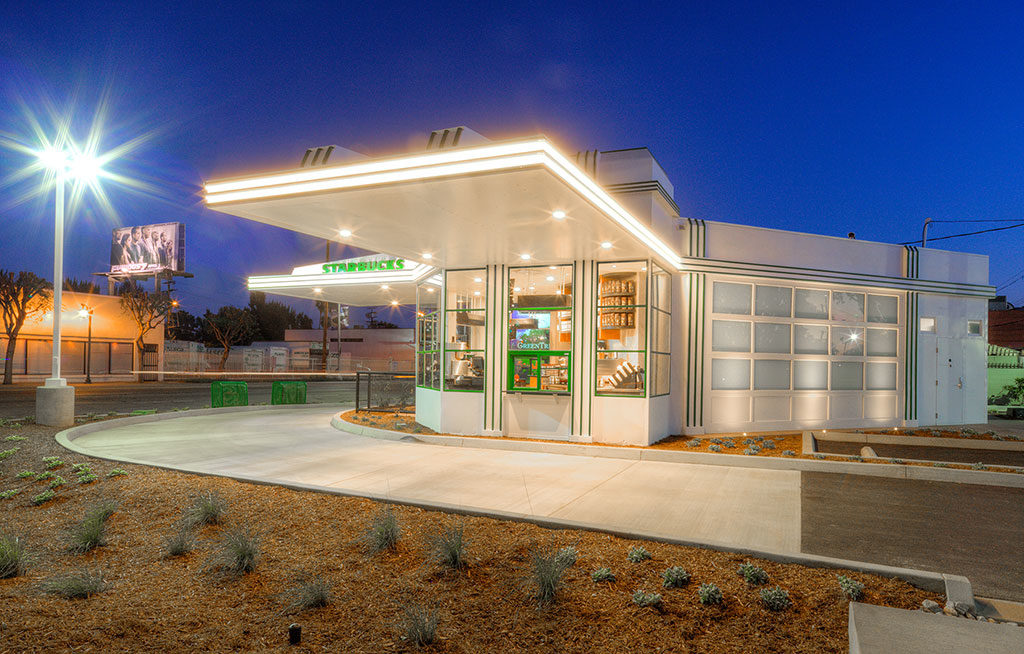 Starbucks Restores 1930s Hollywood Gas Station Into A Beautiful Drive-Thru added by Newsroom on March 30, 2015
View all posts by Newsroom →