restaurant chain Carl’s Jr. is getting in on the hype for Steven Spielberg’s latest movie, Ready Player One.

Carl’s Jr. recently tweeted that it would be changing the name of its charbroiled sliders to “SpielBurgers,” in honor of the director and his upcoming film. “Spielberg hasn’t signed off yet, but we assume he’s cool with it,” the company wrote.

A Carl’s Jr. representative said, “SpielBurgers are not a menu item at Carl’s Jr. locations. This was a social stunt from the brand to try and get the attention of Spielberg and his team to celebrate the launch of Ready Player One.”

As it turned out, Spielberg was not cool with it, nor was Warner Bros., the studio behind the film. “.@CarlsJr Appreciate the #ReadyPlayerOne love but this is not approved,” the studio tweeted.

Undeterred by the lack of approval, Carl’s Jr. sent a representative to Amblin Entertainment, Spielberg’s production company, with a plate of so-called “SpielBurgers” as a gift to the man himself. According to videos on Carl’s Jr.’s Twitter account, they were “booted” from the property before they could deliver the Oscar-winning filmmaker his burgers, but left a note on his car asking to “talk about SpielBurgers ASAP.” 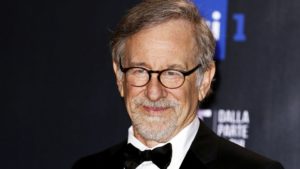 thereafter, Spielberg personally posted a video of himself addressing the publicity stunt on Amblin’s Twitter account. “It has recently come to my attention that Carl’s Jr. wants to rename their charbroiled sliders ‘SpielBurgers’ and they’re pretty good, but I’m passing,” Spielberg said in the self-shot video. “Cease and desist. You can’t do it — sorry, guys.”

The restaurant chain, quoting Spielberg’s tweeted video, responded that it was honored that the director enjoyed its burgers and seemed okay that it couldn’t officially use his name. “OMG Spielberg likes our Charbroiled Sliders! (He’s not down with #SpielBurgers but we’re fine with that),” the company wrote.