By Newsroom on January 14, 2014Comments Off on Taco Bell Canada Declares “DLT for Life”

Ever since Taco Bell launched the celebrated Doritos Locos Tacos in Canada in August 2013, Canadian Taco Bell fans have had one, bold request: DLT for Life.

To celebrate the news, a Canadian Taco Bell superfan decided to make a permanent commitment by getting a Doritos Locos Taco tattoo on his arm, in exchange for a lifetime of DLTs. 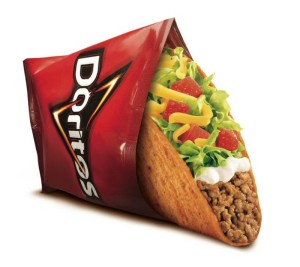 The entire tattoo experience was documented in a short edgy video that Taco Bell fans can watch on YouTube and on Facebook.

“Although Doritos Locos Tacos were only supposed to be in Canada for a limited time, Taco Bell Canada fans loved them so much, we had to take action to make DLT a permanent menu item,” explains Veronica Castillo, Marketing Manager, Taco Bell Canada. “In a bold move, we invited one of our biggest fans to profess his love for Doritos Locos Tacos by getting a DLT tattoo in return for free DLTs for Life,” says Castillo.

“As Canada’s favourite brand of flavoured tortilla chip, we had a hunch that the Doritos Locos Tacos could be a real winner,” says Jason McDonell, Vice President, Chief Marketing Officer, PepsiCo Foods Canada. “Doritos fans and Taco Bell customers in Canada blew us away with their appetite for this bold taco experience. We are thrilled to see this collaboration with Taco Bell Canada become a permanent one,” says McDonell.