By Newsroom on February 8, 2016Comments Off on Taco Bell Unveils the Quesalupa with Help from James Harden & Neymar

The cheesy Quesalupa, a chalupa with a cheese-filled shell, is here.

Taco Bell revealed the new product, which it first mentioned in a humorous redacted press release, in its final Super Bowl spot. 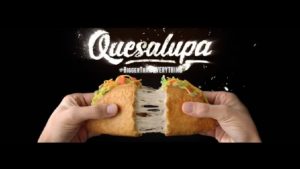 A 30-second version of the ad, created by Deutsch L.A., aired during the first quarter of the game. The brand used its website, to allow fans to preorder the mystery item and have it delivered to them the day before the Big Game ad debuted.

According to the spot, the new product is going to be bigger than man buns, Tinder, drones, driverless cars, hoverboards and VR. It’s even bigger than some of the celebrities featured in the ad including James Harden and football star Neymar.

Taco Bell Unveils the Quesalupa with Help from James Harden & Neymar added by Newsroom on February 8, 2016
View all posts by Newsroom →