By Newsroom on February 27, 2015Comments Off on TBWA\HAKUHODO Tops Extreme Pizza Deliveries with a Downhill Descent

The ‘Xtreme Pizza Delivery Service’ ran for the first two weeks of February. Delivering to remote locations in the snowy mountains, over difficult terrain and through tough weather conditions, Nissan proved once more that no location is impossible for an X-TRAIL. 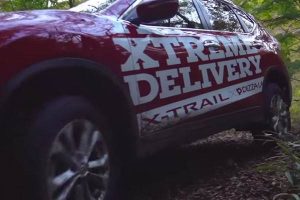 The call for talent was announced on several different websites, including ‘An’, one of Japan’s largest part-time recruitment websites, as well as the Nissan Facebook page, which created a huge amount of positive public attention on social media.

Using a specially designed smoke canister with built-in GPS, customers were able to alert the ‘Xtreme Pizza Delivery Service’ from anywhere at anytime. Once the smoke was spotted by the patrol staff, the pizzas were driven to the snowy mountains in a Nissan X-TRAIL equipped with high traction snow treads, and then finally delivered by snowboarders and winter athletes. The entire delivery process took less than 30 minutes on average, which is the same level of service provided in urban areas.

TBWA\HAKUHODO Tops Extreme Pizza Deliveries with a Downhill Descent added by Newsroom on February 27, 2015
View all posts by Newsroom →