By Newsroom on February 10, 2016Comments Off on Tesco Plays Matchmaker for Valentine’s Day With ‘Basket Dating’

To help Tesco become the destination supermarket for Valentine’s Day, BBH has created an online campaign that sees a psychotherapist match-make shoppers based on the contents of their shopping baskets.

For many, Valentine’s Day feels like a retailer event awash with the same offers, targeted at the same people: couples. Tesco are talking to everyone this year, showing how the supermarket can help both people in relationships, who want bright ideas for being genuinely romantic, as well as the 51% of the nation who are single and ready to find their match. 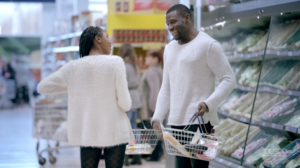 Created by BBH Live, BBH’s 30-strong creative and data driven social content unit, the hero online film looks to test whether your shopping basket can help you find love. Based on the insight that your shopping basket says a lot about you, the film sees a psychotherapist analyse the different baskets of 32 singles and match them based on how complementary their chosen products were. The film then follows the couples as they are sent on a date, with varying degrees of success. At the end of the film, viewers are then driven to four, helpful videos that feature romantic ideas that can be recreated at home.

The ‘Basket Dating’ campaign is running across social media on YouTube, Facebook and Twitter. All films were produced by Black Sheep Studios, BBH’s in house video production studio.

‘Basket Dating’ follows the success of Tesco ‘Spookermarket’, also created by BBH Live and Black Sheep Studios, which garnered almost 30 million views and was named one of YouTube’s Top 10 Ads of the Year in 2015.

Tesco Plays Matchmaker for Valentine’s Day With ‘Basket Dating’ added by Newsroom on February 10, 2016
View all posts by Newsroom →