By Newsroom on September 5, 2013Comments Off on The King’s Road to Welcome Exciting Pub & Dining Room

The Imperial Arms in Chelsea has long been a popular venue, with locals and visitors alike flocking to enjoy its charms. Now this King’s Road landmark, with its stunning Victorian façade, is to undergo an exciting metamorphosis this October, offering customers a superb new venue in which to eat, drink and socialise.

The Imperial will offer a comprehensive menu of quirky, nutritious dishes with international influences, all made using British ingredients. This culinary offering has been designed to appeal to those who appreciate visually stunning but uncomplicated food that allows the quality of the ingredients to shine through.

Along with a focus on good eating, The Imperial is also committed to being as environmentally friendly as possible.

Australian-born Kate MacWhirter, latterly general manager and part of the launch team at The May Fair hotel’s acclaimed Quince restaurant, is passionate about sustainability. So much so that she founded her own consultancy to help make businesses more environmentally aware.

Accordingly ingredients at The Imperial will be seasonal and responsibly sourced, while dishes will be accompanied by an eclectic wine list, many organic and British. The restaurant will adopt an array of ways in which to reduce its environmental impact, such as composting all of its food waste.

The Imperial’s new interior will be equally arresting; using the high ceilings to their full advantage, it will offer a sleek and modern feel with fresh, clean lines and a light airy feel. Period features will be retained throughout, with the overall look very much in keeping with its stylish, design-led neighbours.

Offering a relaxed and low key vibe, but with friendly and dynamic waiting staff, The Imperial will be the ideal spot to drop in for breakfast (eat in or takeaway), a working lunch, a glass of wine and snack with friends or a fine three-course evening meal.

Guests can choose to eat in the 50-seater restaurant with its vibrant open plan kitchen; the slightly more informal bar area, in the gorgeous garden or on the King’s Road watching the world go by. 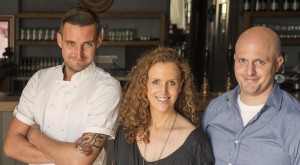 The team behind The Imperial bring with them years of experience in the hospitality industry. Kate was general manager of Paramount at Centre Point, taking it from being a members’ club to a leading restaurant, bar and events space. She also spent several years working for Anouska Hempel at The Hempel and Blakes, where she learnt the importance of design and personalised service.

Co-founder Alan Turtill started his career at the Waldorf, before moving on to such well known London establishments as L’Odeon, Century private members’ club, the Kensington Roof Gardens and Paramount, which he ran as general manager for three years.

In 2005 he launched his own collection of gastro pubs, one of which, The Old Mill in Berkhamsted, won the Observer Food Monthly Food Award for Best Bar. The group was very successful, founded on the principles of reasonably priced, good quality food, seasonal and responsibly sourced, that will be a core part of the offering at The Imperial.

In charge of the Imperial’s kitchen will be rising young chef Tom Hope who, at the age of just 25, has already established an impressive résumé since he first entered the profession a decade ago. Starting as an apprentice at the newly opened Cross at Kenilworth under head chef David Hands (Bouchon Bistro), Tom was running his own kitchen by the time he was 18.

After three years as chef de partie at the award-winning Red Lion at Claverdon, he left to open The Falcon in Hatton before being headhunted by Peach Pubs to join the team at The Old Mill in Berkhamsted, where he first worked with Alan.

The Imperial will open seven days a week, from 8am to midnight.

The King’s Road to Welcome Exciting Pub & Dining Room added by Newsroom on September 5, 2013
View all posts by Newsroom →