By Newsroom on January 8, 2014Comments Off on The Phoenix Who’s Still Rising 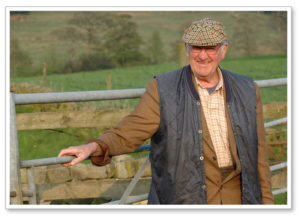 That was 90 years ago. Now, when most people his age are happy with a comfy chair and a cup of cocoa, this tenacious West Yorkshire grafter can still be found in his family’s farm shop – founded by his father Allen in the 1920s – watching over the fourth generation to run the business and making sure they’re maintaining the high standards set for them almost a century before.

‘I’m in here every day, whether they like it or not,’ said Charles, who took on Hinchliffe’s when his father died in 1941, expanding and developing the shop, butchery and restaurant complex in Netherton, Huddersfield, in the subsequent decades. ‘I don’t do a right lot anymore, but I’m here come rain or shine.’

He keeps a close eye on his grandsons, Simon & Ben Hirst, both now partners in the business, to ‘make sure they don’t get too big for their boots’ and enjoys passing the time of day with customers and staff, many of whom are now old friends.

‘I’ve always enjoyed it here,’ said Charles. ‘I worked hard to build this place up, so it’s nice to see it doing so well. There’s a good atmosphere and everyone gets on well while getting on with their job. I set the standard a long time ago and they’re keeping it up today.’

You don’t have to look too far to see where his tenacity and indomitable spirit comes from. His father, Allen, escaped relatively unscathed from the First World War only to lose a leg falling from scaffolding while working as a plumber. Undaunted, he set up a successful butcher’s shop in Huddersfield before moving his family out of town to launch the country’s first farm shop, selling home-reared chickens and eggs.

Even then, 11-year-old Charles, the eldest of four children, was already showing he shared his father’s acute business acumen. ‘I’ve always been a wheeler-dealer,’ he said. ‘When I was three I started raising my own bantams, and at 11 I sold sweets to my grammar school friends. I sold them at half price and practically put the school tuck shop out of business, so they chucked me out in the end.’

He was only 17 when his father died, but he was head of the household and had to take on all the responsibilities that entailed – including taking the helm of the family business. He soon began to put his own stamp on the Hinchliffe’s brand, expanding the range to include home-grown vegetables and home-reared beef.

When the time came, his own children – Robert, Richard and Susan – followed him into the family business and, while his sons have since moved on to pastures new, his daughter, her husband Les and their children Simon and Ben continue to work together to keep the Hinchliffe flame burning bright. 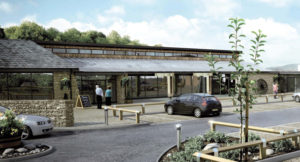 Unfortunately, it was a flame of an entirely different variety that almost reduced the family business to ashes on July 5th 2010. A small fire ignited by an electrical fault in the butchery engulfed the entire complex, gutting not just the butchery but also the farm shop, restaurant, store rooms and offices.
‘Many people cried that day,’ said Charles. ‘I shed a few tears myself, but it’s just one of those things in life that you have to get through. I’m so proud of what we’ve achieved since.’

And so he should be. The extended Hinchliffe family – relatives, staff, customers and friends – have worked hard in the years since the devastating fire to build the business back up to its previous levels of success and beyond.

Now, almost four years on, Kirklees Council has granted the business full planning permission to replace its temporary buildings with a new purpose-built farm shop and restaurant. The groundwork will begin in April for a November launch.

And who will be first in the queue after the ribbon’s cut on the first day of trading? Charles, of course. ‘Some people thought the fire would be the end of us, but I knew better,’ he said. ‘It’s just the way we do things. If a job needs doing, you get off your backside and do it.

‘The plans for the new shop and restaurant look great, but it won’t feel completely real until I’m walking round and having a good look at what’s on the shelves.’

Charles enjoyed two bumper bashes for his 90th birthday – a family celebration at home and a fantastic 3 course meal in Hinchliffe’s Restaurant (where else?). He even helped choose the menu for the meal and insisted on Hinchliffe’s own superb Roast Sirloin being one of the choices.

But at such a grand old age, isn’t it about time he thought about retiring? ‘No way!’ he said, giving the idea short shrift. ‘The only way I’m leaving here is in a box.’

The Phoenix Who’s Still Rising added by Newsroom on January 8, 2014
View all posts by Newsroom →