By Newsroom on October 16, 2017Comments Off on The Science Of Rock ‘N’ Roll – The Rock Music Milkshake Mixer

The Big Bang Fair challenged a team of inventors, scientists and musicians to make a delicious beverage with music. The result was the world’s first ever milkshakes mixed entirely with sound energy from live music. 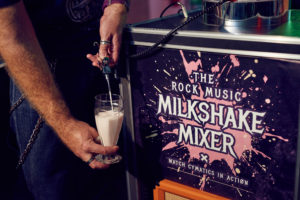 The music-made beverages were not the result of mellow pop tunes by Justin Bieber or Ed Sheeran however, but the raw power of rock music. Indeed, during the unusual experiment, the team found they would have the greatest success in their musically moving milkshake endeavours by turning to powerful guitar riffs from stadium bands Foo Fighters, Kings of Leon and even Blink-182.

So how is it possible to make these delicious shakes solely through the power of sound energy? With a standard electric guitar and a somewhat less standard madcap contraption that was one-part guitar amplifier and one-part kitchen blender, that’s how.

Bringing together the worlds of education, science, music and kitchenware in a way never seen before, The Rock Music Milkshake Mixer (or the RM3 for short) has been created to mark registrations opening for The Big Bang Fair 2018. The Big Bang Fair is the largest celebration of science, technology, engineering and maths (STEM) for young people in the UK. For more information visit www.thebigbangfair.co.uk 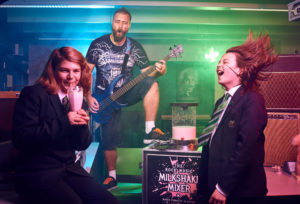 Beth Elgood, Director of Communications at EngineeringUK, who organise The Big Bang Fair, said: “Going into its tenth year in 2018 The Big Bang Fair continues to be a great source of STEM inspiration for young people, representing an amazing opportunity for young visitors, their teachers and parents to get hands-on with a wide range of activities, workshops and shows. With this in mind, we’re delighted to unveil the unique Rock Music Milkshake Mixer prototype today, which is sure to be another popular interactive exhibit at this year’s show.”

So how does the RM3 work? First pour powdered milkshake and milk into the jug and screw the top on tight. Next, plug in an axe (that’s a guitar), ready your plectrum and start playing some crunching riffs at max volume (ideally volume 11).

Now marvel as cymatics (that’s the visualisation of sound through a physical medium – in this case milkshake) allows you to witness the hard rock sound waves, emitted from the speaker, coming into contact with the milkshake mixture and vigorously vibrating it. Soon enough, you’ll have a deliciously 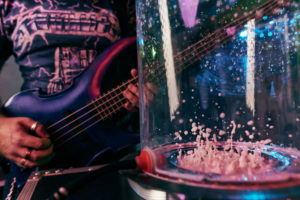 thick drink, made entirely through the power of sound energy.

Year 7 students at Westminster Academy in London were the first to try the revolutionary new prototype earlier this week, where it was officially launched by The Blowfish, the world’s only heavy metal marine biologist.

The Blowfish commented: “Metal music and science are two of my biggest passions, so when I was offered the chance to launch the Rock Music Milkshake Mixer, it was an absolute no-brainer. I’m a big believer in finding new and innovative ways to get kids excited about science and the world around them. What better way of achieving that than by harnessing the epic power of rock music to make a tasty, delectable treat?”

The RM3 will be on display, and free for guests to try out at The Big Bang Fair 2018, which is due to take place at the NEC in Birmingham in March next year.

The Science Of Rock ‘N’ Roll – The Rock Music Milkshake Mixer added by Newsroom on October 16, 2017
View all posts by Newsroom →