Tom Aikens Announced as the Ambassador of JRE UK & Ireland

By Newsroom on September 9, 2016Comments Off on Tom Aikens Announced as the Ambassador of JRE UK & Ireland 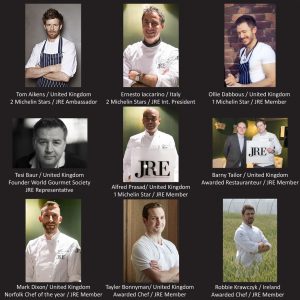 JRE, the restaurant association of European young master chefs that holds more than 180 Michelin Stars and over 4000 GaultMillau launched in April in the United Kingdom and Ireland at an event at The Royal Academy of Arts attended by JRE’s International President and two Michelin-starred chef Ernesto Iaccarino.

The launch is swiftly followed by the announcement that Tom Aikens has become an ambassador for the association and membership has grown with chef heavyweights such as Ollie Dabbous joining. Other new members include Tayler Bonnyman (The Five Fields) and Alfred Prasad have joined JRE in London. From Petersham, Barny Tailor (The Dysart Petersham) and from Norfolk, Chef Mark Dixon (The Kings Arms Flegg) have also joined JRE. Also Ireland is represented in the association with Chef Robert Krawczyk (Barbazon Restaurant at Tankardstown) from Rathkenny. The country representative of JRE in UK & Ireland is Matthias Tesi Baur, founder of the World Gourmet Society.

Tom Aikens Announced as the Ambassador of JRE UK & Ireland added by Newsroom on September 9, 2016
View all posts by Newsroom →