By Newsroom on January 10, 2014Comments Off on Tui Breweries Offer £100,000 for One Handed Cricket Catch 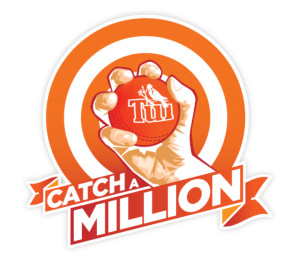 Tui Brewery has unveiled its latest campaign via an experiential PR stunt.

It is offering a share of $1 million, and a sole prize of £100,000 to anyone who can make a one handed catch from the stands at New Zealand Cricket whilst wearing one of its orange T shirts.

Tui said the promotion is already beginning to generate “a sea of Tui orange” at cricket grounds.

“Tui knows the occasion of watching cricket is as important as the game itself, and Kiwis don’t need much motivation to make things interesting in the stands,” said William Papesch, Tui marketing manager.

“Still, a hundred grand gets the boys together pretty quickly, and the response has been phenomenal.

“This is a great collaboration with our agency partners – we’re all thrilled to see the campaign in action and really galvanise not just the cricketing community, but the nation.”

The campaign initiated this week.

Tui Breweries Offer £100,000 for One Handed Cricket Catch added by Newsroom on January 10, 2014
View all posts by Newsroom →