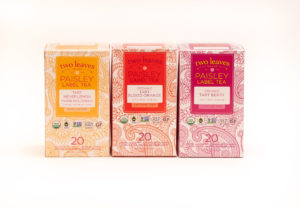 Two Leaves and a Bud Tea Company is delighted to announce a trio of new herbal teas aimed at satisfying the taste buds of a growing demographic of tea lovers: Paisley Tarts.

The new Organic Meyer Lemon, Organic Blood Orange and Organic Tart Berry flavors are enough to make any tea lover take notice — something Two Leaves and a Bud CEO and Founder Richard Rosenfeld says is a current trend in the beverage industry.

“Sour drinks, including beer or cocktails, are in the spotlight lately, and we wanted to explore a new twist on fruit tea,” Rosenfeld said. “But we don’t consider our three new teas too ‘sour’ — they’re merely tart enough to give you that satisfying, lip-smacking flavor that’s often left out of a cup of herbal tea.”

Paisley Tarts are part of the tea company’s Paisley Label Tea line — a finer cut of tea packaged in traditional paper teabags, which are also fairly traded and certified organic. All three new teas are blended to brew up fast with rich, punchy flavors, and steep to beautiful jewel tones in the cup — or in a glass, on ice.

A consumer research report in late 2013 that delved into which flavors are most appealing to consumers when it comes to both hot and iced tea found that lemon was top choice, followed closely by sweet/berry flavors, and orange just outside the top 10 preferred flavors.

“Many consumers have grown up with those tart and puckery flavors, from candy like Sour Patch Kids and historically we’ve seen a trend toward more complex and intense flavors,” Chapman says.

“I expect that the trend toward sour and tart is just going to continue as we seen an evolution toward more extreme flavors. In the restaurant industry, chefs are helping by stretching palates in new directions.”