By Newsroom on March 27, 2014Comments Off on Vegetable Mascot Becomes Unlikely Sex Symbol 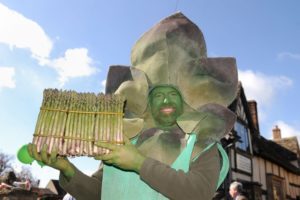 A giant human asparagus spear has got ladies’ all of a flutter throughout Worcestershire and surrounding counties. Gus the Asparagus Man, the mascot of the British Asparagus Festival, has become the Tom Jones of the horticultural world.

Gus was created as part of the world-famous British Asparagus Festival, which takes place annually in Evesham, the UK’s largest asparagus-growing area. However, his popularity has mushroomed and women have started to throw their gardening gloves at him wherever he goes.

He has appeared at the House of Lords, Buckingham Palace, the Red Bull Karting Championships and is now being asked to show his spear at year-round events with a female-focus throughout the West Midlands – from talks at Women’s Institute Meetings to judging cookery competitions. 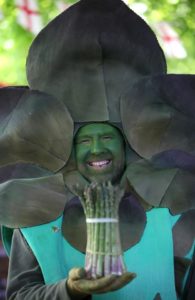 Gus is enjoying his new-found celebrity status and the perks that come with it. He is driven around in a cavalcade of Morgan Cars, gets stopped for autographs and is offered the best seat in restaurants.

His popularity is such that a range of merchandise, including a saucy calendar, is planned for 2015. As well as his own Facebook and Twitter pages, Angela Tidmarsh, tourism officer for Wychavon and creator of Gus, is setting up a Fan Club by popular demand. Commenting on Gus the Asparagus Man, she said:

“Our jolly green giant certainly seems to get the sap rising when it comes to the ladies. Stardom has not gone to his tip and he’s hasn’t forgotten his roots. Gus will be the star of the show at this year’s Great English Asparagus Run which is being held from 8am at The Fleece Inn, Bretforton on 23rd April”, and he can also be seen at AsparaFest on the 31st May and the lst June”.