By Newsroom on October 9, 2013Comments Off on Warburtons Half & Half Announces New ‘From Our Family To Yours’ Campaign 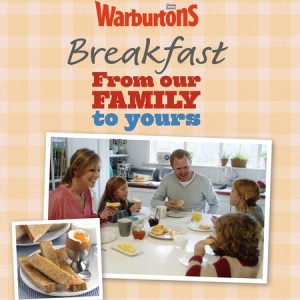 Warburtons will launch the latest marketing campaign to promote its Half and Half product range next month.

Led by creative agency WCRS, the campaign will include a television advert directed by James Griffiths (Moxie Pictures) based on the story of a little boy writing to Jonathan Warburton to inform him of the role his bread would play in an intense sibling rivalry.

Alongside the television advert, the campaign will also feature a radio offering and social media content which features Olympic medal-winning triathlete brothers, Alistair and Jonathan Brownlee exploring their own brotherly competitiveness in a range of exclusive video content.

Rick Hirst, managing partner, WCRS said: “We’re really proud of this next instalment of the ‘Dear Jonathan’ campaign for our friends in Bolton. Payback is a cracking spot that has an excellently observed human truth that’s watertight with the Warburtons Half and Half product promise; eat more of this and get ready to take your brother down. Getting the super-competitive Brownlee brothers involved in our social media push was also a real coup.”

Mark Simester, the company’s marketing director, was enthused about the new campaign: “This campaign marks an important investment for Warburtons to further our growth in the Half and Half category. Mums see our Half and Half product as the perfect compromise for feeding their growing brood; it has the great taste of white bread with all the goodness of wholegrain. This next phase of our marketing campaign puts a strong emphasis on this key product area as well as continuing to build on the rich brand heritage and family values of Warburtons with our ‘From Our Family To Yours’ strapline.”

The current campaign will also have an outdoor element, which will allow customers to collect coupons that give them a free trial of Warburtons new Sandwich Thins.

The latest campaign is scheduled to go live on 7 November.

Bakery, Bread, Campaign, From Our Family To Yours, Half & Half, Integrated, UK, Warburtons, WCRS

Warburtons Half & Half Announces New ‘From Our Family To Yours’ Campaign added by Newsroom on October 9, 2013
View all posts by Newsroom →