Y&R And VML Create Talking-Fountain For Drink Up Initiative

By Newsroom on September 9, 2014Comments Off on Y&R And VML Create Talking-Fountain For Drink Up Initiative

The people of Brooklyn and Manhattan may have been slightly taken a back recently when quenching their thirst at one of the many water fountains. Rather than the usual experience, pedestrians found that the water dispensers actually started talking to them.

“We put it in a busy public space where it wouldn’t seem out of the ordinary and people are likely to drink up,” Y&R creative director Bruce Jacobson explained.

Y&R, and digital agency VML New York, collaborated with the Partnership for a Healthier America to create this water fountain as part of the new campaign to promote #spreadthewater, an initiative made to encourage Americans to drink more water. 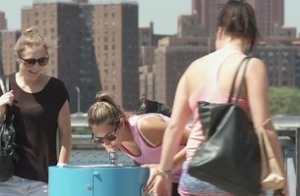 “We do everything we can to not look like your father’s public health campaign,” said PHA CMO Drew Nannis. “It doesn’t preach hydration facts or ounces consumed per day. It’s always a challenge when you’re not promoting a specific product, but just a category.”

The fountain works by issuing audio content every time the drinker’s lips touch the water stream, therefore encouraging more water to be drunk. If they are curious enough to want to hear more from the fountain, they will have to keep on drinking.

“The more you drink, the more content you listen to,” said Harsh Kapadia, a senior creative at VML New York. 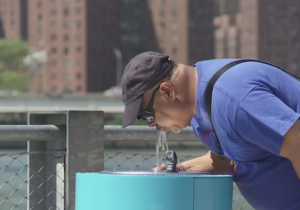 “We did a lot of testing to see how long people drink water so we could line up audio files to it,” said Mr. Kapadia. “We’re hoping to contextualize it a little bit more,” he said.

The VML team are currently toying with the idea of bringing it to events, like red carpets and expanding on the concept that anything you do is enhanced by drinking water. Mr. Kapadia hopes it becomes a more permanent fixture across the U.S. “we’re treating it like a prototype,” he said.

As Drink Up’s one year anniversary comes up, there will be additional contests and giveaways, but the fountains will continue to be the most promoted component over the next few weeks. “They’re immensely portable and we can adjust what they say, so we plan to move them around the country to different events and places,” said Mr. Nannis.

Y&R And VML Create Talking-Fountain For Drink Up Initiative added by Newsroom on September 9, 2014
View all posts by Newsroom →