By Newsroom on November 18, 2014Comments Off on 50-Year-Old Man Drinks 10 Cokes a Day for Science 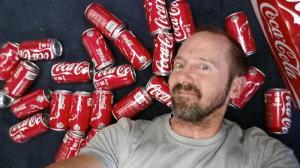 A 50 year-old Los Angeles man is drinking 10 Cokes a day for 30 days to help increase public awareness about the dangers of sugar in our diet. George Prior, father of two and Los Angeles resident, is taking careful daily measurements of his weight, blood sugar, body fat, and blood pressure, and blogging the results on his website.

Ten cans of Coke may seem like a lot of sugar, but Prior points out that 50% of all Americans ingest that same amount of sugar every day: nearly a half pound! High intake of sugars is the root cause of some of America’s worst health problems: obesity, diabetes, heart disease, and even cancer, and Prior believes that many people don’t fully realize how much sugar they drink daily in beverages like juice, coffee, sports drinks, and fruit drinks – not to mention sodas like Coke.

Just three weeks into the diet, Prior’s website reports that he has gained 19 pounds, increased his body fat by more than 60%, and finds his blood pressure and insulin resistance slowly rising, just by adding ten Cokes a day to his normal diet.

Why Cokes? Prior explains that, “I know most people don’t actually drink ten Cokes a day, but about half of us do eat the same amount of sugar. I’m drinking Coke because it’s the iconic soft drink and gets attention, but I could do the same thing with ten orange juices a day, ten Jamba juices a day – any sweet beverage will make you gain weight and increase insulin resistance, just like drinking Coke.”

Prior hopes that when people see the weight he puts on in just one month of Coke drinking, that they’ll realize two things:

Before starting the 10 Cokes a Day diet, Prior was reasonably fit and thin at 168 pounds. He is now 187 pounds, and has six more days to go. 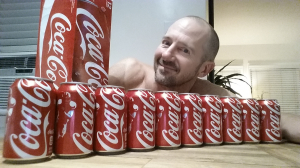 “I think there are a lot of people suffering from illnesses that sugared drinks cause, like diabetes and obesity,” says Prior. “But there’s a real mixed message in the media about how to solve the problem: Do you cut calories? Do you cut fats? Do you take drugs or get surgeries? My message is this: Start with sugar. Start with bread. Don’t worry about fats.”

Prior claims that the diet will cause no real harm to him over the short time he’s doing it. “I think I can lose the weight in just a few weeks,” he says. “I’ll just stop drinking the Cokes. And maybe have an extra couple servings of bacon. I don’t normally eat much sugar, so I’ll go back to that.”

Prior’s website at 10cokesaday.com not only charts his physical changes over time, but also includes diet tips, diabetes facts, photos, and videos of his experiment.

50-Year-Old Man Drinks 10 Cokes a Day for Science added by Newsroom on November 18, 2014
View all posts by Newsroom →