By Newsroom on August 5, 2014Comments Off on A Glow-In-The-Dark Ice-Cream That Will Make Your Tongue Light Up 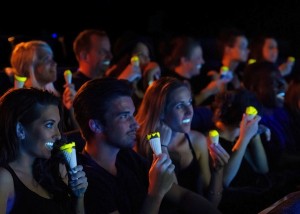 Food design studio Bompas and Parr has come up with ice-cream that glows in the dark so that movie goers will be able to see in the cinema.

The studio made this ice-cream for Cornetto, which features their trademark waffle cone dipped in chocolate. The special ice-cream consists of a golden-yellow filling and rests on top of the cone.

The creative team injected the ice-cream with riboflavin—also known as vitamin B2—which illuminates under wavelengths of UV light. As this chemical is bitter, the designers also put in sugar and fat to make it taste more like ice-cream.

UV light was also shone into the cinemas to “light up” the food.

The enzymes inserted into the ice-cream can be found in jellyfish and fireflies, and the firm has plans to launch a series of glow-in-the-dark dessert sauces made from genetically modified bacteria.

The best part is having a cool tongue that also lights up when you lick the ice-cream.

A Glow-In-The-Dark Ice-Cream That Will Make Your Tongue Light Up added by Newsroom on August 5, 2014
View all posts by Newsroom →