By Newsroom on July 20, 2015Comments Off on adam&eveDDB & John Smith’s Nab the First Pint Glass-shaped Constellation 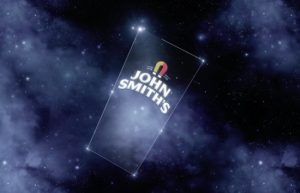 John Smith’s is launching a campaign that is truly out of this world. The Heineken owned ale brand has acquired the first ever pint shaped constellation, made up from 100 stars in the night sky, and is giving ordinary British blokes with extraordinary talents the chance to own one of them.

Part of the brand’s Only Ordinary By Name campaign, the John Smith’s Constellation will make stars of ordinary John Smith’s lovers who have previously uncelebrated talents. The digital activation invites those who are ordinary by name, but possess extraordinary talents, to upload a short video of them showcasing their special skill here, to be in with a chance of winning their very own piece of the universe.

Once shortlisted, the talented star owners will then be featured in a video on the digital platform alongside the very star that belongs to them, so that consumers can follow the full story of the constellation online. 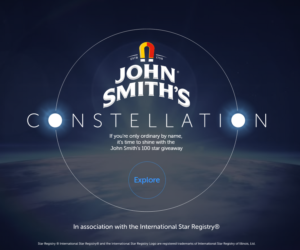 The activation, created jointly by adam&eveDDB & Starcom MediaVest Group went live on 16th July and continues throughout the summer. The constellation is held in an interactive video unit created in partnership with Wirewax Ltd. The campaign is to be supported via social media, digital display and PR.

Ifeoma Dozie, at John Smith’s, commented: “This is a great way to engage with the passionate and extraordinary fans of John Smith’s. An extension of our Only Ordinary By Name campaign, the John Smith’s Constellation gives us the opportunity to quite literally make stars of those who, like John Smith’s, are ordinary by name but have hidden extraordinary talents. We’ll celebrate these men and then reward them with a prize like no other. We can’t wait to see the entries coming in. What ale lover wouldn’t want their very own piece of the universe’s first ever pint glass shaped star constellation – it’s a real talking point and something we think our consumers will be chatting to their mates about in the pub.”