By Newsroom on February 19, 2015Comments Off on Angry Orchard Launches Newest Hard Cider in the U.S.

Angry Orchard announced the national release in the US, of its first-ever hopped hard cider, Angry Orchard Hop’n Mad Apple. The cider makers drew inspiration for this new cider from a traditional craft beer ingredient – hops – to develop a cider that combines subtle floral and tropical fruit notes from Strisselspalt and Galaxy hops with bright, fresh apple flavor from American apples.

First launched in 2012, Angry Orchard is the number one selling hard cider in the US, where hard cider has seen explosive growth and is showing up on more menus than ever as a refreshing alternative to craft beer and wine.

The cider makers at Angry Orchard experimented with a variety of hops when crafting the recipe for Hop’n Mad Apple and ultimately chose a blend of Strisselspalt and Galaxy hops for their unique flavor profiles. The hops complement the cider’s bright apple aroma, allowing the fruit to shine through. Strisselspalt hops, from France, are subdued and contribute subtle citrus, herbal and floral notes to the cider. Galaxy hops are found in Australia and contribute bright, juicy tropical notes like pineapple and mango. These hops are added to the cider post-fermentation, a process known in the brewing world as “dry hopping,” to give the cider a fresh hop aroma and a pleasant dry finish without any bitterness.

“You might say we’re obsessed with ingredients; we have been experimenting with cider recipes for nearly twenty years, searching the world for the best cider apples and playing around with other special ingredients,” said David Sipes, cider maker for Angry Orchard. “Hops are traditionally used in beer, but we found they work really well in our Angry Orchard hard cider too. With Hop’n Mad Apple, the subtle floral and tropical fruit notes of the hops accentuate the cider’s fresh apple sweetness and give the cider a nice, dry finish.”

Hop’n Mad Apple, along with Green Apple and Angry Orchard’s fall/winter seasonal, Cinnful Apple, are made with American culinary apples including Gala, Fuji, Red Delicious, Golden Delicious and Granny Smith apples. The cider makers at Angry Orchard are constantly working to perfect and innovate the craft of cider making, and through their experimentation have found that certain regions within the United States, such as the Pacific Northwest and the Northeast, share characteristics – rich soil and ample sunshine – with apple-growing regions in Europe that are known to produce apples conducive to cider making. For the new Hop’n Mad Apple cider style, the slightly less tannic juice of culinary apples from Washington State was found to best accompany the Strisselspalt and Galaxy hops. 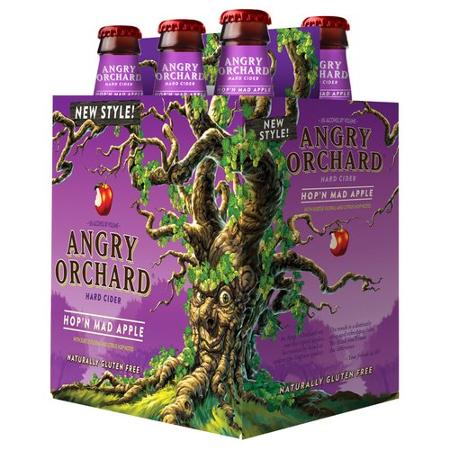 “I use hard cider all the time at my restaurant because it is a versatile pairing and cooking ingredient, and this is especially true with the new Hop’n Mad Apple hard cider from Angry Orchard,” said Chef Gillespie. “It’s absolutely delicious with everything ranging from barbeque favorites like brisket and ribs, to hard cheeses with distinct flavor profiles such as manchego and aged gouda. I recently made some hopped cider oysters that were incredible; the bright fruitiness and dry finish of the cider complemented the oysters really well.”

Angry Orchard Launches Newest Hard Cider in the U.S. added by Newsroom on February 19, 2015
View all posts by Newsroom →