By Newsroom on July 1, 2013Comments Off on Arnold Worldwide’s New Ad for Jack Daniels Tennessee Honey

Arnold Worldwide have launched ‘Swarm’, a new spot for Jack Daniel’s Tennessee Honey, that’s creating a real buzz for the number one selling honey-flavoured whiskey in the U.S.

Like the initial spot that launched the brand, this one also features King Bee, only this time with an unstoppable force of CG bees (fans) who follow him in the hunt for a bottle of Tennessee Honey. It generated 10M impressions during a pre-release period on social media.

As the camera opens on a city street, late and empty but alive with potential, the brand’s hero King Bee erupts through a plume of steam. He deftly navigates an energetic swarm of bees as they converge from all directions and descend into the night, dodge around corners and close in on their target — a glowing bottle of Jack Daniel’s Tennessee Honey. 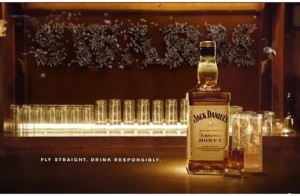 “Swarm” is designed to be an evolution of the original King Bee launch spot that demonstrates the many fans that Tennessee Honey has acquired throughout the year. King Bee is back with his swarm – his followers.

Filmed on the Warner Bros. backlot was key to ensuring substantial control over the shots because nailing down the right lighting, location and camera angles were important for maintaining a gritty feeling throughout the spot without losing the tenacity of the swarm.

Pre-released via Twitter/Facebook, “Swarm” generated more than 10 million impressions before ever hitting the TV waves, where it aired during NBA and NHL playoff games, late night TV, and sports and lifestyle programming. Jack Honey and the “Swarm” TV spot will be on air three more times this fiscal year in support of the other Jack Daniel’s Tennessee Honey program periods.