By Newsroom on November 28, 2013Comments Off on Artem SFX Make It Rain… Brussels Sprouts!

Love them or hate them, brussels sprouts are an inescapable fact of a good old-fashioned British Christmas – but what would you do if you were faced with 4,000 of them?

That’s what happened when Artem SFX, an award-winning physical special effects company, were recently asked to help bring to life the new Christmas campaign for The Range, home, leisure and garden superstore. Producer Claire Jones commissioned the team at Artem to create 4,000 lightweight, replica brussels sprouts that could be used to fire over a set as if it were raining vegetables. 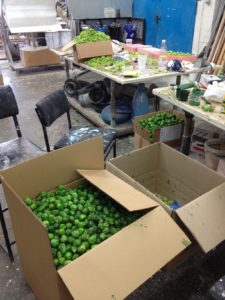 Artem created the sprouts by moulding a set of real brussels sprouts, and then casting the sprouts in green urethane foam. Being surrounded by thousands of brussels sprouts soon got the team in the Christmas spirit, and the fake sprouts were then painted with various different shades of green to resemble their real counterparts. It was both effective and gave the sprouts their realistic finish – many people couldn’t tell the difference!

Simon Tayler at Artem said, “We needed to come up with a quick practical method that would produce a replica sprout that could be fired through air cannons placed in scissor lifts and would be safe to fall on people and parked cars. In the end, it all worked very well. The only problem was picking up our 4,000 soft sprouts after each take!”

Chris Dawson, owner and founder of The Range commented, “Christmas is one of our busiest times of year and we always want to create a buzz with our Christmas TV campaigns. We were pleased with the Christmas adverts and thought the brussel sprouts were really effective and added a great comic value.”

Celebrating its 25th anniversary this year, Artem was involved in the Olympics and Paralympics opening and closing ceremonies and created the famous animatronic dog for the Churchill Insurance adverts. Artem’s Colin Foster has been nominated for Best Model Maker at this year’s British Arrows Awards for his work on Brian the Robot for the confused.com campaign.