By Newsroom on April 8, 2013Comments Off on Beagle Restaurant Opens In East London Railway Arches

CO Workshop has created the branding for new east London restaurant Beagle. The restaurant, with interiors designed by Fabled Studio, is housed in the arches of Hoxton station on the east London line.

Beagle was founded by brothers Danny and Kieran Clancy, and CO Workshop was brought in to work on the project about eight months ago having previously designed the branding for, Krankbrother, the duo’s DJ project.

Olivia French, CO Workshop co-founder, told Design Week, “The restaurant has quite a masculine feeling, so I created quite a masculine logo. It’s really subtle and clean, and the lines in the “E” are a reference to the train line, and it’s also a bit Bauhaus. I think it feels quite “fashiony” too, because of how clean it is.” 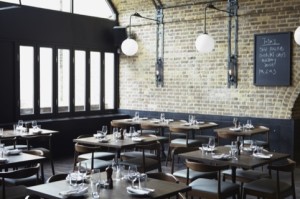 The three lines that form the ‘E’ of the logo will be used as a stand-alone device alongside the main mark. The identity will be shown across menus, coffee cups, signage, the Beagle website and other printed collateral.

The restaurant name is taken from one of the locomotives that used to operate on the train line in its previous incarnation as the North London Line.

Beagle will house a restaurant, bar, coffee shop and an outdoor seating area for up to 60 covers.

Tom Strother, director at Fabled Studio, said, “We were inspired by the Victorian railway carriages from the old North London Railway line that used to run overhead, mixing this with industrial fittings and finishes to complement the industrial vernacular and history of the arches.”

The arches themselves are fitted with louvered slats to admit light and air, and furniture in the exterior seating area is also made from reclaimed railway sleepers.